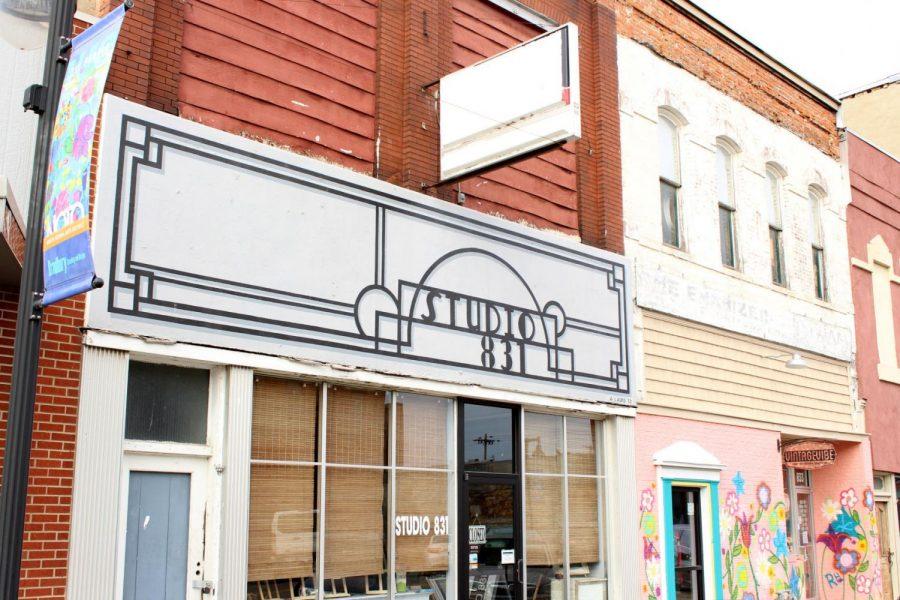 Renovations: Studio 831, which rests on Kansas Avenue along with the multiple other galleries, shops and venues, is undergoing renovations in February alongside continued artist galleries. Studio 831 is currently open on First Fridays or by appointment with owner Barbara Waterman-Peters.

North Topeka, known as a center for the arts in Topeka as a whole, has seen growth as a hub for entertainment both for its First Friday Art Walks held every month, and for daily sightseers as well according to district business owners.

North Topeka is known for the multiple art galleries that host shows on a weekly basis, as well as the recently opened NOTO Arts Center that serves as an outreach program to support artists in Topeka. On nights such as First Fridays, vendor booths and street performers also join the mix of food, music, and visual arts available to peruse.

Staci Ogle is the owner of one such gallery in NOTO, Haven Arts, who says her studio has seen an influx of attendance at First Fridays and beyond. The attendees have also become involved in the culture around Haven and the other galleries.

“It’s really fun to watch the crowd of people come up, and share their thoughts on what they thought Haven meant, and what it was like to view the artwork that was up there,” Ogle said.

Ogle said that despite the low temperatures in the winter, visitation in NOTO has continued to grow both at First Fridays and also on a day-to-day basis.

“December is usually a pretty good month for us, for Christmas sales,” Ogle said. “We’ve had so many other businesses that are opening their doors down there, and some of the businesses that weren’t open on a full-time basis, are having more regular, stronger hours. I don’t think there’s any kind of lag economically going on down there.”

Barbara Waterman-Peters, owner of another art gallery in NOTO called Studio 831, agreed with Ogle and said she was happy to see growing support for local artists in the district.

“We are so thrilled to welcome so many people through to see our art,” Waterman-Peters said. “[It] gives us a chance not only to show it, but also talk about it, and ultimately sell [one’s art]. A lot of times, when people are able to stand and speak with the artist and ask questions about the work, they become a lot more engaged with it.”

Waterman-Peters also said that she was grateful for the growing amount of various perspectives arriving in the NOTO Arts community from both visitors and artists.

“As far as NOTO is concerned, I’m thrilled that it’s growing,” Waterman-Peters said. “Businesses and artists have come and gone, and that’s one of the things that’s special about it. There’s room for diverse people, diverse businesses, and diverse artists. People from all walks of life come through here.”

For the upcoming months, Ogle said that Haven Arts has multiple exhibits planned.

“We are working on showing the ‘Abstraction’ show at Haven Arts, which is a combination of many artists around the Topeka area,” Ogle said. “Coming up in March we have a show with Jeanie Cologne and Joe Pennington. Those are our featured artists we’ll have.”

Waterman-Peters said that with the growing audience in NOTO in mind, Studio 831 is currently working on updates to their building that will coincide with an upcoming gallery.

“We are in the process of doing some renovation inside to better accommodate the artists’ working places,” Waterman-Peters said. “What we have done so far will be available for people to see [with] our featured artist this month, Diane Lawrence. She has a wonderful show of her paintings on silk. They’re all about tornadoes, so they’re a combination of landscapes and very moody skies.”

In addition to the galleries Ogle has planned, February also marks the anniversary of Haven Arts’ opening.

“It’s been a year for us, which is exciting,” Ogle said. “We’ll have some little treats to go with First Fridays when you come up this month. It has been one heck of a ride, to open the gallery and experience some of the artwork that has come through there. We’ve had a couple of interactive art shows throughout the year, so we definitely let the public know we’re open to a lot of different ideas.”

One previous gallery of Haven’s that Ogle recalled from First Fridays was ‘White Noise,’ an interactive event where all canvases displayed were blank, but had a title above them to serve as a prompt for thought. Sticky notes were given to viewers to write on and place next to the canvas.

“The idea behind that was to get you to think about what would be on that canvas based on the title that canvas was given,” Ogle said. “We really didn’t expect that we were going to have much of a turnout with that event, but by the time we were done with the show, we had purple sticky notes all over the walls.”

Ogle also mentioned an opportunity for Washburn art students to assist with painting a mural at the annual Festival of Trees through Haven.

“The mural that they’ve had up there for the last 25 years is needing to be replaced,” Ogle said. “We have a small group now that is going to be putting the mural together, so we have that opportunity available.”

Art students interested in assisting with the mural or responding to art calls, or visitors wanting more information on NOTO Arts, can find out more by visiting Haven Arts or Studio 831.