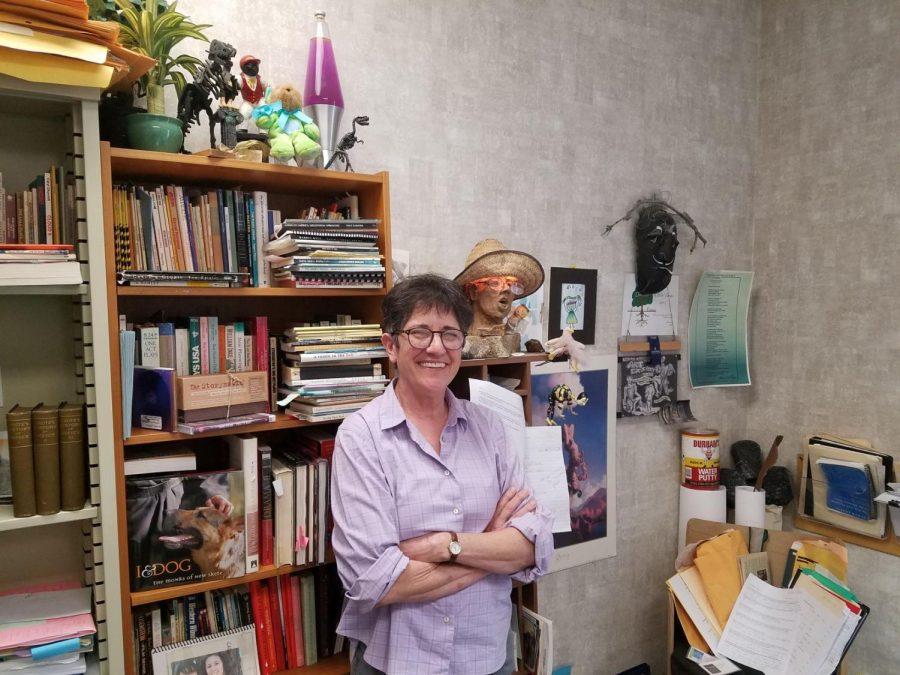 Penny For Your Thoughts: Professor Penelope Weiner’s office is decorated with interesting relics from her time at Washburn. Next to the lamp shaped liked a human head is a row of towering bookshelfs filled with scripts and plays from all over. Posters of the many productions she’s directed also hang on the office’s walls.

Penelope Weiner, an associate professor who has been at Washburn for 27 years, is retiring at the end of the 2017 Spring semester. Before coming to Washburn, professor Weiner taught at Avila University in Kansas City where she got her start teaching students about her passion, theater.

Weiner has taught several classes at Washburn, including but not limited to: Drama Classic on Video, Survey of Theatre Literature, Text Analysis and Intro to Voice Diction. Weiner says by far her favorite classes to teach are Acting 1 and Playwriting.

“In Acting 1 you learn improvisation techniques,” she said. “It’s all about the basics of creating a reality on stage.” Weiner extolled the joys of watching kids learn how to improve their technique in the class. “I love seeing actors make discoveries about being present, which is something our world often encourages us not to do.” Whether its phones, grocery lists or computers, Weiner said that kids learned in Acting 1 to be more vigilant around them and to be awake and attentive to changes around them.

Playwriting is a joy for Weiner because she is able to read about people’s beliefs. “I love to hear what students have to say. It’s fun to teach them how to present their thoughts by having characters act instead of them writing out an essay or a short rant to explain their thoughts.”

By far, according to Weiner, the highlights of her time at Washburn were the productions. “I’ve had the opportunity to direct plays that you don’t get to do when they leave academia.”

During her time at Washburn professor Weiner has directed several works known for their narrative complexity and very poignant opinions. Some of these works are “The Laramie Project,” “Wit,” “Rabbit Hole,” “Uncle Vanya,” “Gross Indecency: The Three Trials of Oscar Wilde” and “Lysistrata.”

The plays were a challenge according to Weiner, but that was part of the fun for the professor. “The Laramie Project” was a personal favorite. It tells the story of Matthew Shepherd, a gay college student, who was beaten and tied to a fence in the town of Laramie. The play uses real life interviews from Laramie residents to capture the opinions of the town’s residents. These interviews are turned into an actual script that tells the point of view of residents that come from very diverse backgrounds.

“Kauffman is known for these devised plays that use things like interviews, transcripts and biographies to combine them into stories about homosexual men being mistreated by society for their love,” Weiner said.

It took 15 years to bring “Gross Indecency” to Washburn. “It seemed perfect to place it right during the time of the election as well.” In her final years at the university Weiner became adament that they adapt Kauffman’s play.

“Kinder Transport,” “And they put handcuffs on the transport” and “The Illusion” were some of Weiner’s most difficult plays to adapt at Washburn.

“There was a lot of history to dig through, and then you have to decide how you’re going to jerk that history around,” Weiner said.

The subject material of “Kinder Transport” made it particularly difficult. The play follows the children who left Germany in fear of the Holocaust and “Handcuffs on the Flowers” is a very surreal story about men improsoned after Franco took control of Spain.

Weiner also consistently was an advocate of student created productions.

“There have been five or six times during my career when we did full productions of student shows,” said Weiner. “We have also done a lot of readings.”

Weiner also helped create an adaptation of Washburn graduate, Gary Jackson’s, collection of poem’s known as “Missing You, Metropolis” which uses superheros and comic books to contemplate about the struggles of life and the desire for superheros to help us in everyday life.

Weiner has many avenues open to her after she finishes at Washburn.

“I’m going to keep my options open, but I always have some theatre project I’m working on,” Weiner said. “I have a play I wrote in the 90s that is receiving a second reading sometime this spring.”

Weiner also brought up her role in directing a rendition of the third book of Homer’s “The Odyssey.”

If one thing is for certain, it’s that Weiner will never give up on her morals when it comes to performance. “If you don’t like what a play is saying then why involve yourself in it?” Weiner has other plans if theater work doesn’t pan out. She considers being a suicide prevention hotline operator as a possible alternative.

Whatever she chooses to do Weiner no longer wants to be silent. She will continue to create art with her friends whether or not community theater’s choose to let her adapt her preferred form of theatre: cerebral dramas with complex characters that seek to understand the complexities of human life.

“I’m going to miss having this opportunity and privilege to talk to young people about life,” Weiner said. “Just remember what you do with your life is important, and if it’s not important to you, than do something else.”