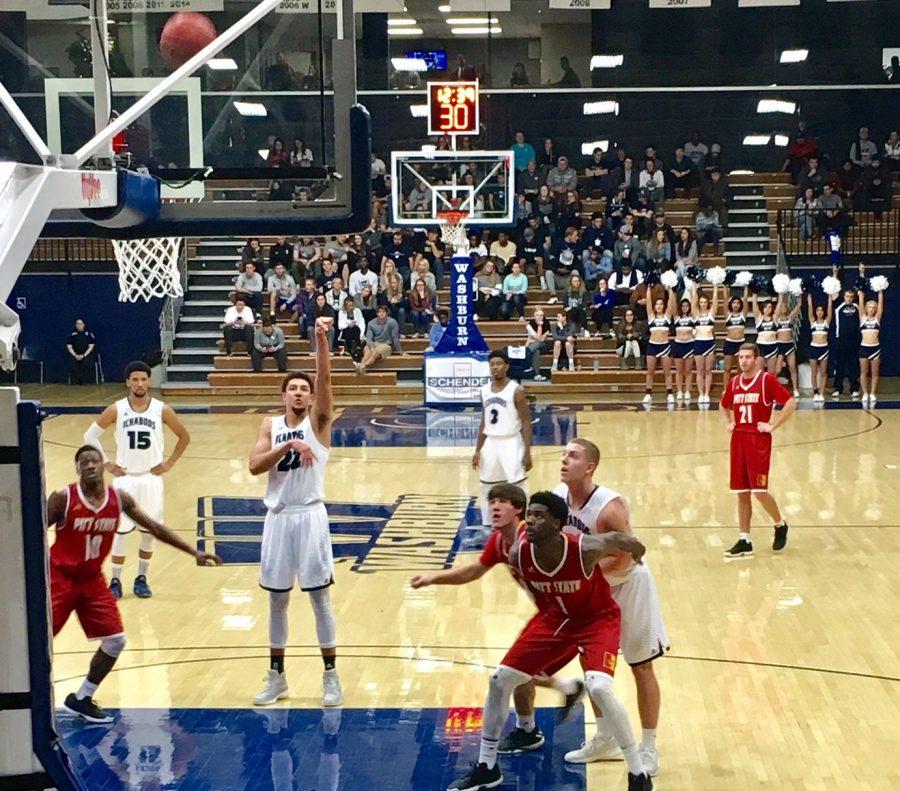 Bold Shot: Brady Skeens shoots a free throw Jan. 23 at a home game against Pittsburg State. Skeens led the Ichabods to win by 20 points against their opponents.

Brady Skeens stands out as a record-setting basketball player for Washburn University, following in the footsteps of his mother.

The 6-foot-7 forward led the Ichabods with 20 points in a win against Pittsburg State on Jan. 23, 2017, and recorded three blocks to break his own single-season blocks record (64) just 18 games into the season.

Skeens, a 20-year-old junior from Lenexa, joined the Ichabods his freshman year and has been breaking records ever since. Among the “Career All-Time Rankings” found on wusports.com, Skeens currently ranks first in field goal percentage, defensive rebound average and blocked shots.

But he’s not the only Skeens in the school record books. Brady’s mother, Joy Skeens, also has a prominent place in WU basketball history.

Inducted into the Washburn Athletics Hall of Fame in 2012, Joy finished her career as the Lady Blues’ all-time leading scorer and rebounder. Brady says that his mother’s involvement in basketball influenced his decision to attend her alma mater.

“It’s the same (down home feeling) environment as when I was here,” Joy said.

The key to Joy’s success was then head coach Patty Dick, the coaching staff and the family-like support they gave her.

“They were my family away from home,” Joy said.

Brady echoed this as he credited his success to the coaches, teammates, students and faculty that create the Washburn community.

“The soonest we could get him in, that’s when we started,” said Joy.

Playing basketball since he was 4 years old, Brady has spent most of his life working to get where he is today.

“I’m just trying to beat all her records,” Brady said, while sharing a smile with his mom.

Joy insisted that Brady has already outranked her academically and athletically.

Brady is currently pursuing a degree in business administration and plans to keep his options open for opportunities beyond graduation.

Brady says that although he had other options when choosing where to go to college, WU ended up being the right choice. He says it has provided him with the outstanding coaches and teammates that have helped him achieve success.