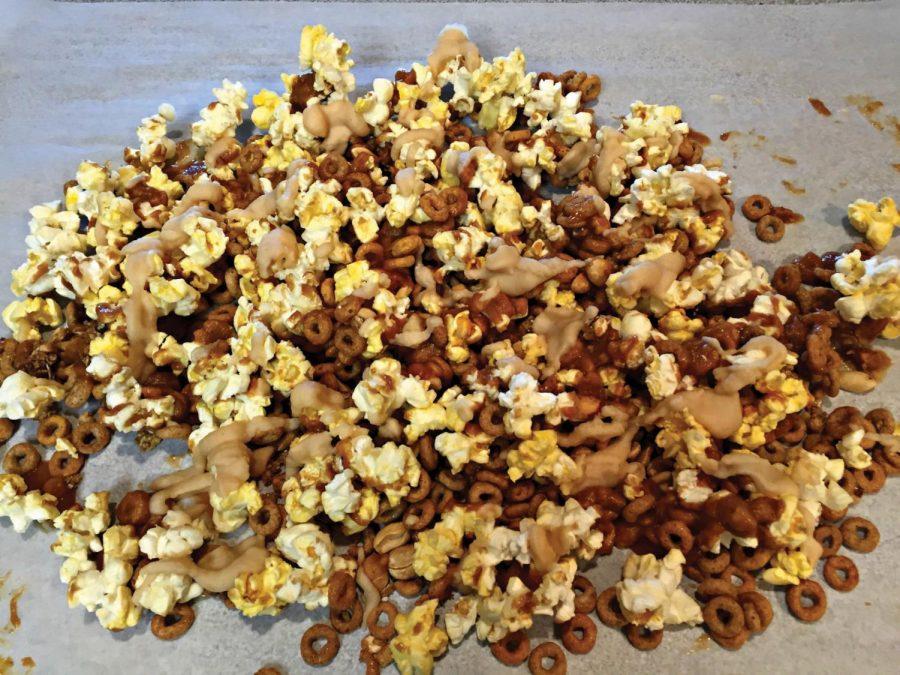 It’s no secret that I have a sweet tooth, so it’s rare that I crave anything salty. Pretzels, chips and popcorn don’t normally do it for me. This tasty popcorn mix is my twist on a salty snack.

Popcorn is a relatively healthy snack, as long as it’s not coated in butter or additional salt. This popcorn mix itself isn’t overly healthy, but it could also be a lot worse. The Cheerios are heart-healthy, and add a touch of sweetness to the salty mix. The peanuts add the perfect amount of crunch and a dose of additional protein. As per usual, I had to incorporate honey, peanut butter and white chocolate into the recipe to satisfy my sweet tooth.

Fortunately, this recipe is pretty flexible and adaptable. If you want the snack to be less sweet, use original Cheerios or Cheerios Protein instead of Honey Nut. You can also sub whatever sort of nut you like if peanuts aren’t your favorite.

I believe the peanut butter and honey should remain pretty standard in the recipe, as it’s a major component, but you have absolute freedom as to whether or not you use chunky or creamy peanut butter. Lastly, I used white chocolate as the drizzle on top, but if you favor milk or dark chocolate, melt that along with the coconut oil for the topping. This is a great on-the-go snack that can be made in five minutes and be easily bagged up and taken to class. It’s probably smart to bag the mix in separate bags because, let you be warned, once the bag is opened, closing it before the snack mix has vanished is a hard task.

Mix together popcorn and Cheerios on baking sheet and spread out.

Microwave peanut butter and honey in 20-second increments until melted. Stir until uniform throughout. Drizzle mixture evenly over popcorn and Cheerios mixture.

Place baking sheet into the fridge for at least 20 minutes to harden. Remove from fridge and break into pieces. Store leftovers in an airtight storage bag or container at room temperature.