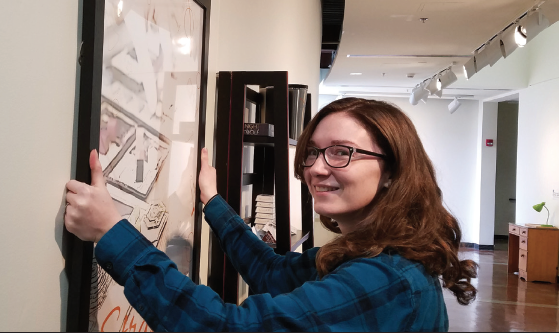 Hanging in There: Coultis hangs a poster with the name and logo of the fictional company she created for an art project. Student’s don’t just create the art for their show, they must also design how their artwork will be placed throughout the gallery before the show begins.

The Art Building’s newest senior showcase was installed Feb. 27 and pieces connected to gallery can be found on the first and second floor. The showcase is from senior graphic design major Amber Coultis and is entitled “Duplicate.” The show’s title is meant to highlight Coultis’s work done while pursuing her degree and also the main focus of her future occupation. “As a graphic design major you’re always trying to make something that you can duplicate over time and it tends to change. Sometimes it doesn’t turn out right, but embracing that is also art.”

A major installation in the gallery is the “Identity Project” that Coultis created. The project tasked students with creating a fake business that matched the interests of the artist. “Logos, ideas behind the company and where it was set,” were all unique parts of the project according to Coultis. Tomorrow Café was the name of the fictiona coffee house for board game enthusiasts that orbits the red planet Mars. Coultis’s design of the cafe is futuristic but she distinctly decided for a more retro design with soft blues and oranges giving off the aura of a ‘50s diner. The project required three-dimensional objects to be part of its structure. To achieve this requirement Coultis made a bookshelf to hold her smaller objects such as a lapel pin and packaged “space chocolates” that match the light blue cyan of the cafe’s overall façade. The bookshelf is also adorned with several table top games to highlight the cafe as a friendly place for friends to come and play board games together.

A tall, tiled self-portrait hangs on the west wall of the gallery. “When you’re working for a graphic design company you are very rarely going to be able to feature yourself in the work you’re doing, so this portrait is sort of my last hurrah. It’s just to show who I am.” Coultis also finds the portrait to be indicative of the process of creating art. This idea of art as a process is central to many of her works, often the final project is wholly unique compared to its original renditions.

“Untitled (Veil)” is another piece meant to highlight the process of creating art. It started with a photograph (which can be found in the upstairs gallery) and then after many steps the final piece is printed on a large piece of silkscreen. “It’s intended to make people curious and maybe form their own assumptions before actually going upstairs and seeing what it is,” Coultis said

In general Coultis’s works highlight how art can change during the creative process.

“With each new copy or production, an image or idea is further transformed;” Coultis said. “Details are lost or enhanced and colors can change. In essence, a new work of art is created.”

Coultis says her time at Washburn has been well spent and that she has learned to accept happy accidents.