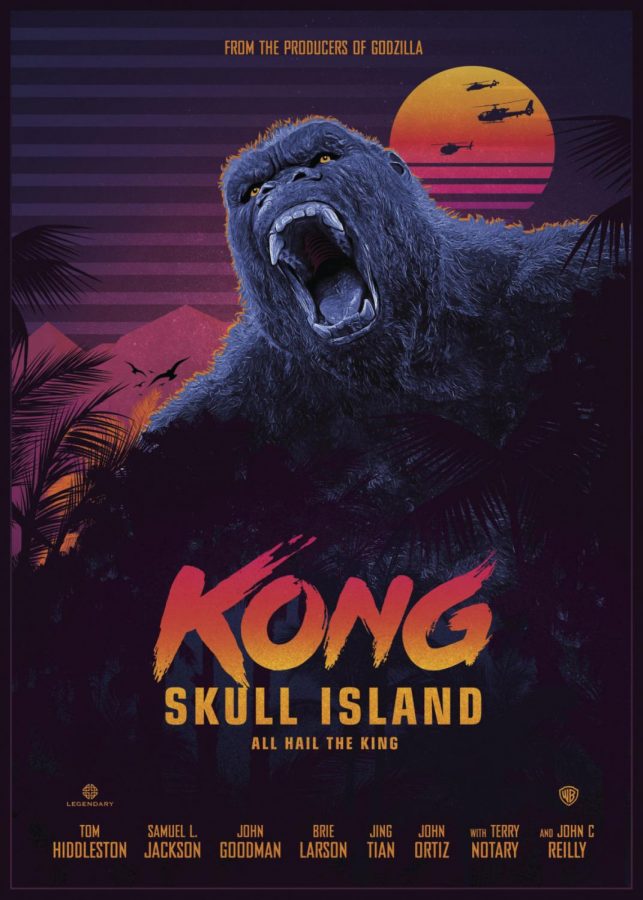 The monster movie genre is far from dead.

This film had a lot going for it. It knew what it was trying to be and succeeded. When word got out that a “King Kong” reboot was coming out from the creators of the well-received “Godzilla” reboot, we wanted two things: Well-executed action sequences and special effects pleasing to the eye.

“Kong” accomplished both of these tasks in a manner that left me satisfied. My grievences with it, then, lie in that it never tried to be more than that flashy action movie we all expected.

The story itself is bare bones, yet servicable. We have a team of specialists who want to find their monster, and things predictably go awry. The characters were all either unmemorable or two dimensional archetypes (the perfect action hero, the damsel in distress, etc.).

Were they entertaining? Yes. Did they offer any depth to the story or stick out in my mind after I left the theatre? No.

That’s not necessarily a bad thing, but it’s certainly not good either. “Kong” was trying to be an action-centric film that just wanted to show us all a fun time. It’s not aiming for accolades come next awards season, and I respect it for that.

I wish the writers had had the courage to write their characters more complexly and better engage the audience, but it doesn’t ruin your experience so long as you manage your expectations.

The cast did great with what they were given. In it were heavy hitters like Samuel L. Jackson, John Goodman, Tom Hiddleston, Brie Larson and John C. Reilly. While none of their characters are written with much emotional depth or substantiel backstory, they each do their best with what little direction they have, making for a fun time.

The quirky comedic timing as well as the slower paced dramatic chunks of dialogue are all well-handled and tell a complete story. Again, I just wish that this talented cast had had a better script to work with than such a straight-forward action piece so much like its predecessors.

The best part of this film were its special effects. Much of the film was shot in Hawaii, but most of it was green screen and CGI. This is far from a criticism, though, as creepy, almost pre-historic setting turned horrific battleground is meant to be something straight out of a fantasy.

The actual monster King Kong himself was a testament in and of itself to how far special effects have come.

“Kong: Skull Island” did exactly what its audience wanted it to. We were given beautiful visuals, a cool soundtrack, great action and a fun cast to work with. That said, injecting some heart or wit to the script should have been a given, not an afterthought.

If you’re after a simple story with bright colors, loads of explosions and a laugh or two, you’re in for a treat.