Menghini to compete at nationals 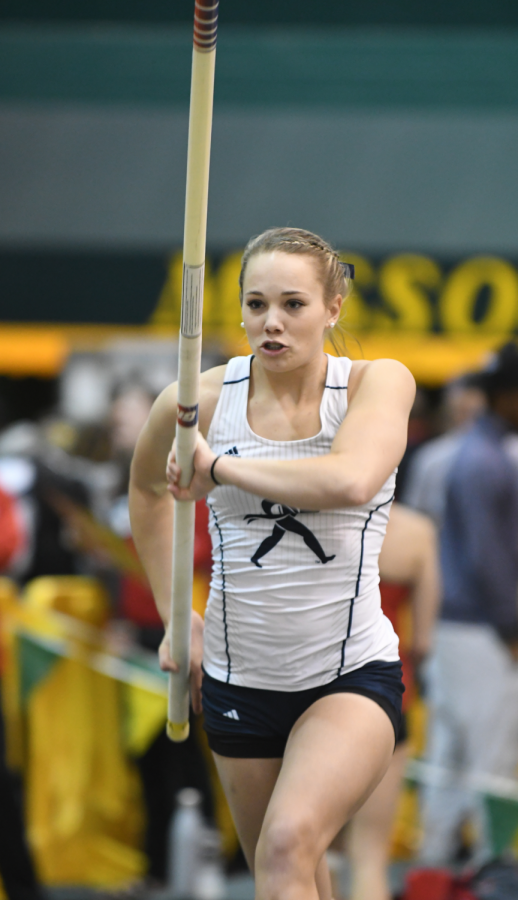 Focus: Pole vaulter Allexis Menghini was the only member of the women’s or men’s indoor track team to qualify for indoor track nationals, which will take place this weekend in Birmingham, Alabama. Menghini later broke her personal best again at the MIAA championships Feb. 25.  Her new personal best entering this tournament will be 3.79 meters.

The Washburn University Track and Field program was dead for upwards of 30 years before it was resurrected for this, the 2016-17 school year, meaning both the men’s and women’s teams were faced with the daunting task of starting from scratch, bringing in a majority of freshmen athletes without a wealth of experience. Coaches often look for transfer athletes to provide some of that experience, and head coach Cameron Babb found what he was looking for in Allexis Menghini.

Menghini, a redshirt junior from North Platte Nebraska, is a transfer from The University of Nebraska at Lincoln. Competing in pole vault, Menghini hit the NCAA Provisional mark for nationals with a vault of 3.72 meters (just under 12 and a half feet). She did this at Pittsburg State on Dec. 9, while competing in her first meet as an Ichabod. As impressive as that may be, Menghini, who willingly admits to being very competitive, knows that she can go higher.

“That’s not a great mark for me. My personal record is 13’ 3.75,” Menghini said of her provisional qualifying vault.

“Obviously I need to hit that mark first before I think about going higher, but if I could hit 14’ this year, that would be amazing. And I would like to win nationals.”

So how does a first year program land an athlete of Menghini’s caliber and experience at the division one level? Rick Attig specializes in the pole vault, and has a resume of coaching success that is impressive to say the least. He has coached national champion athletes at both Kansas University and the University of Nebraska, along with numerous conference champions. He even coached a pole vaulter who made team USA for the 1996 Olympic Games. So when Menghini overheard conversations at Attig’s camp between Attig and Babb about Washburn’s track and field program, she was very intrigued.

“I thought it would be fun to come jump for Coach Attig. He’s one of the best pole vaulting coaches in the world,” Menghini said. “At Washburn, I feel like we get more individual attention for specific events than at Nebraska, there are so many kids there, it’s easier to fall through the cracks.

Menghini is one of the older Ichabods of the women’s track and field team this season, and hopes that her experience will be helpful to younger members of the program. Perhaps many of them could benefit from Menghini’s mindset as she prepares to vault.

“I don’t get nervous, I get excited,” she exclaims.

This week Alexis will officially get her chance to win at this years MIAA Track and Field Nationals. She will be packing her bags for Birmingham, Alabama, where she will be getting her big debut, and a shot at bringing home a trophy.