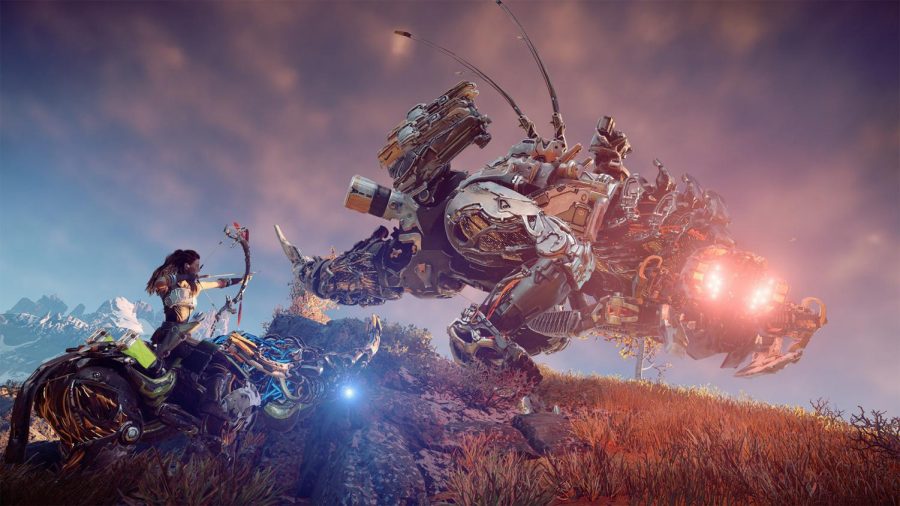 Someone made a game with a strong-willed female protagonist who fights gigantic robotic creatures in a post-apocalyptic setting? That’s the fastest I’ve ever pulled money out of my pocket.

Aloy (Ashly Burch) is an outcast from a tribe that worships a deity they call “All Mother.” Her tribe is primitive, which is odd when you find the year is 3040. Aloy takes part in a series of trails so she may become a seeker, someone given the power to explore their world beyond the boundaries of her tribe’s land. As she explores within the game, she realizes she’s surprisingly important to her world and thus is being hunted down by someone called HADES.

“Horizon Zero Dawn” was highly anticipated, but it’s a game you wouldn’t imagine packing the punch that it does either. It lacks the polish to be called a seminal masterpiece, but it’s still enjoyable enough to call it a worthy and incredibly fun addition to the open-world genre.

The world itself is vibrant and colorful. Located somewhere in the upper west of the United States makes the environments of the game world varied and interesting. Deserts bleed into vibrant jungles and forests before running into massive mountains. It isn’t your standard open world that keeps things simple with one generic environment type covering the map; it’s incredibly varied and colorful. The things inhabiting the game world are the real dazzling points though. Each metallic enemy is an absolute riot to fight. Fighting humans is a bit more of a drag though, especially since the game really wants you to fight human enemies, but every segment involving this gameplay loop feels sluggish. It’s also worth mentioning that the bow’s accuracy when fighting human enemies seemed less useful compared to fighting the machines, possibly due to the smaller human character models. The most surprising virtue of “Horizon Zero Dawn” is its plot though. Aloy’s story is rife with strong emotional moments. As you learn more about her life and purpose, you feel more drawn to her as a person. She’s vulnerable and affable, but also sarcastic and strong willed. She despises her tribe’s misguided religious fervor that shuns good people, and she has an infectious desire to explore.

Overall “Horizon Zero Dawn” is a welcomed surprise. The game works flawlessly and fighting gigantic robot monsters feels just as fun as it sounds, but the extra polish added to the game’s story, characters, and environment design really shows off the quality of the game. For fans of open-world adventures, this game is an incredibly fun must buy.