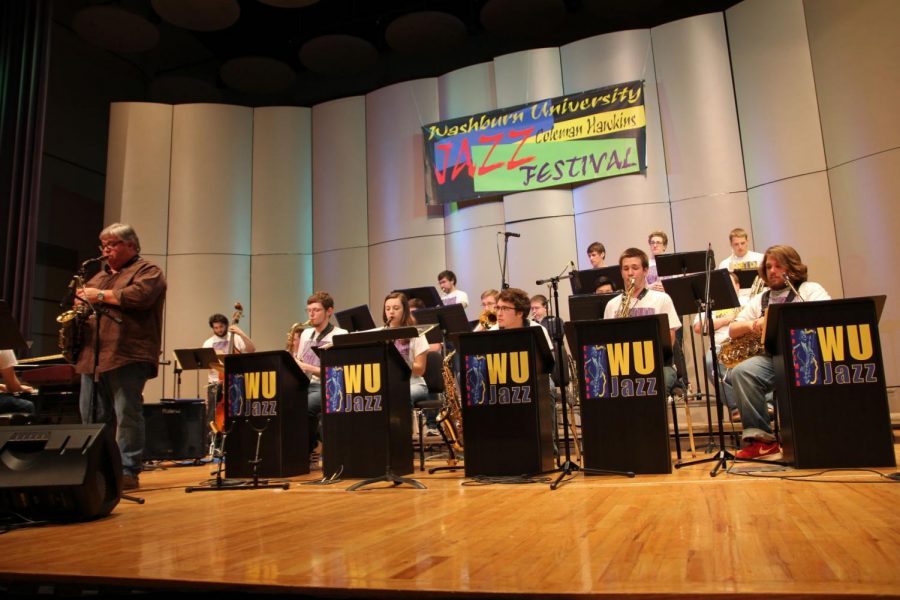 Decorated: Dr. Craig Treinen is the director for the Washburn Univeristy Jazz Orchestra. The director took a moment during the Friday concert to play with his band on the song “Lover Man” by Jimmy Davis and Roger Ramirez.

After a full day of jazz performances at 7:30 p.m. April 14, Washburn’s very own Jazz Orchestra closed the day with a celebratory performance in White Concert Hall. The Coleman Hawkins Jazz Festival is an annual festival put on by Washburn’s music department with the purpose of bringing schools from around the area to help show appreciation and foster the education of jazz.

The jazz orchestra began their concert with “Machine” by Bill Reddie, which featured solos from Jacob Brooks, a junior saxophone performance major and Daniel Albertson, a freshman music education major. Brooks is currently in his second year as a member of the Jazz Orchestra, but the experience certainly wasn’t always simple. “At first it was definitely scary, but now I’m playing lead and its very fun,” Brooks said. During his time at Washburn, Brooks has credited Dr. Craig Treinen, the band’s director, with a lot of his growth as a musician. “Dr. Treinen has taught me everything I know about soloing. He showed me the way.”

From a veteran to a newcomer, Albertson is only in his first year, both at school and as a member of the Jazz Orchestra. “My band director in high school told me I had to join when I was a sophomore and I just have been playing jazz since then.” Treinen took a moment during the concert to highlight the performance craft of Albertson. Treinen noted that he was just a freshman. “He’s going to be incredible once he’s done,” said Treinen. Albertson said his personal favorite song was an Eric Richards adaptation of the classic Beatle’s tune “Eleanor Rigby.” Appearing on the album “Revolver” and written by Paul McCartney, “Eleanor Rigby” signaled a time in The Beatle’s discography when the band had begun to approach their music with a more experimental tone. The song hit number one on the UK Singles Chart and was number 11 on the Billboard Charts.

The Jazz Orchestra also performed songs like James Miley’s “Black Hole Sun,” “In a Big Way” by Dan Gailey and Holmes’ “Vadar’s Vaccination.” Washburn’s Jazz program used the festival to invite students to attend the third annual Coleman Hawkins Jazz Summer Camp. The camp is available for middle school and high school aged students and will be from June 18 – June 23 on the Washburn Campus.

The next Washburn Music Department event is Washburn’s Opera Studio’s production of “It’s A Grand Night for Singing.” The show is at 7:30 p.m. April 20-22 in the Neese Gray Theater.