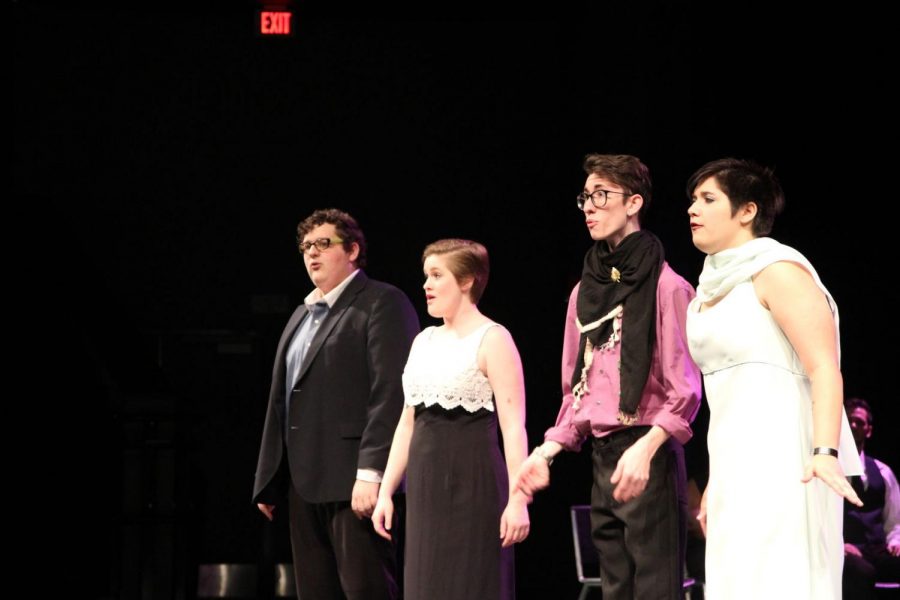 The Washburn University Theatre and Music departments collaborated on their first production together in several years. A coalition of students from both departments led under notable faculty members produced “A Grand Night for Singing.” The production was performed April 20 to 23 at the Neese Gray Theatre.

“A Grand Night for Singing” is a musical revue that showcases the massive oeuvre of Richard Rodgers and Oscar Hammerstein II. The two men are considered legends of the American stage and are credited as two of the most influential artists in the developing Broadway scene. Their first production was “Oklahoma!” which is often considered the first traditional musical. The duo would go on to produce hit musicals like “Carousel,” “South Pacific,” “The King & I” and the incredibly popular “Sound of Music.” Rodgers would eventually be the first person in history to win all four of the major entertainment and show business awards – Emmy, Oscar, Grammy and Tony – which has become colloquially known as an “EGOT.”

“A Grand Night for Singing” was introduced to Broadway in 1993 and features several songs from Rodgers and Hammerstein that are regarded as hits while also featuring a few lesser known songs from the duo’s often forgotten plays. The revue earned two nominations at the 48th Tony Awards in the categories of Best Musical and Best Book of a Musical. Both awards were given to “Passion.”

Dr. Paul Prece, music department chair, was the director of the production with Dr. Andrea Garritano handling vocal direction and conducting the band. Choreography was done by Sally Glassman and set, lighting and costume design were crafted and constructed by associate professor Tony Naylor.

Student performers stated that their directors gave them a large amount of encouragement and helped them give the most authentic performances they could muster.

“Dr. Prece would always allow us to act out our characters how we wanted, but he would always provide us with constructive criticism on how to develop our characters,” said Memerey Revels, a freshman vocal performance major. “He left a lot up to us, but would chime in if he felt it was lacking.”

“Doing the music with Dr. Garritano and then doing staging and acting with Prece was a really helpful rehearsal structure,” Bigelow said. “Prece has a really cool way of drawing out dramatic intent and asking students what they’re trying to convey in the scene. He guides you and gives you a starting point, but he never directly told a student to do a certain thing.”

“It was a really fun first experience,” Laughlin said. “I enjoyed learning from her and getting advice about how to improve myself as a musical actor.”

“I always wanted to be a good musical actor,” Laughlin said. “I did a lot of musicals in high school, and I jump at the chance of auditioning for a musical any chance I get. My inspiration comes from myself and wanting to gain extra knowledge in the area of musical theatre.”

Both Revels and Bigelow enjoyed their time producing the show and liked performing very popular songs for their audience. Revels performed the song “If I Loved You” from “Carousel” and Bigelow had solos for “We Kiss in a Shadow” from “The King and I,” “Love Look Away” from “Flower Drum Song” and the classic “Oh, What a Beautiful Mornin’” from “Oklahoma!”

The ensemble also performed songs like “I’m Gonna Wash That Man Right Outa My Hair” and “Some Enchanted Evening” from “South Pacific.”

Other performances also highlighted the talents of several students involved in the production. One particular performance was “Stepsister’s Lament” from “Cinderella” which was performed by Josey Trimble, Benjamin Anderson and Isabella Martinez-Haskins.

Revels was particularly ecstatic that the two departments worked together to produce this show for students, faculty and Topeka residents.

“I enjoyed all the hard work from the theater and music department combined to make this wonderful show,” Revels said. “It was certainly a grand night for singing.”

The theatre department’s summer production has not been announced, but it will be at 7:30 p.m. from June 16 to 24 and 2 p.m. on June 25 at the Neese Gray Theatre. The music department’s next event is the Choir and Washburn Singer’s collaboration with the Topeka Symphony Orchestra’s production of Gustav Mahler’s Symphony No. 2. The concert will be at 7:30 p.m. Saturday, April 28 at White Concert Hall.