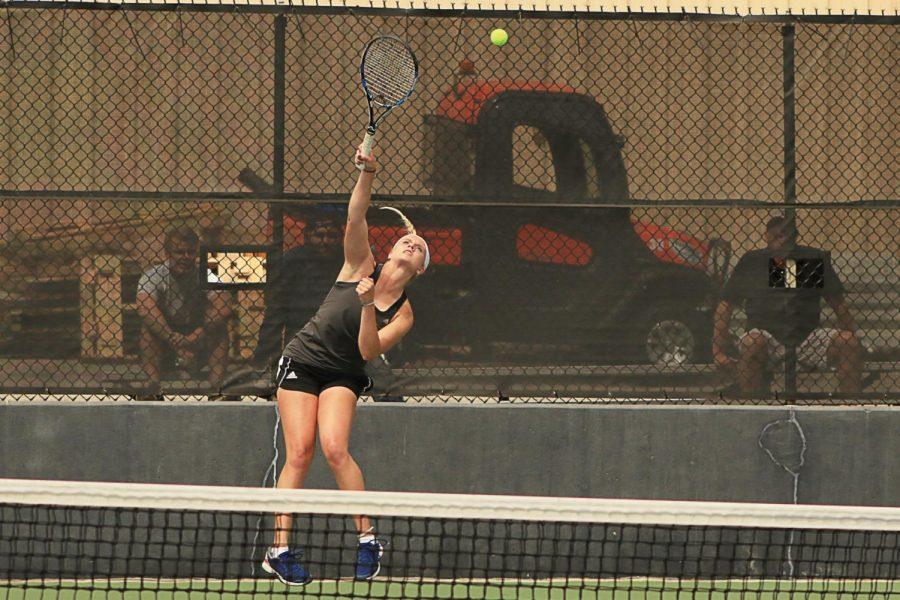 Tennis: Logan Morrissey jumps for the ball during her April 12 doubles match against Baker University.

After wins at Baker and Rockhurst this last week, Matt Barlow was awarded the MIAA Player of the Week.

The softball team has two doubleheaders this week. The first is Friday, April 21, at Missouri Western State. Those games are at 4 p.m. and 6 p.m. The following day, the team has two games at Northwest Missouri State. Those are earlier in the day, at noon. and 2 p.m. These will be the last games of the regular season.

The runners in Track will spend April 20–22 at the University Kansas. They will participate in the Kansas Relays.

The women’s squad will have 22 entries in 10 events and Washburn has 33 entries in 15 events.

So far the Ichabods have four qualifiers from the NCAA Outdoor Track and Field Championships May 25-27 in Bradentown, Florida.

Currently the women’s team is ranked 132nd in the nation and the men’s is ranked 112th.

After participating in the Kansas Relays the Ichabods will compete in the MIAA Outdoor Track and Field Championships May 5-7 in Bolivar, Missouri.

Baseball to play 3 games in Durant

The baseball team’s next three games are against Southeastern Oklahoma University. They will travel to Durant, Oklahoma. The first two games at 1 p.m. and 3 p.m. Monday, April 24. The teams will conclude their series in one final game at 1 p.m. April 25.

The Washburn men’s golf team had an eighth-place finish at the Tiger Classic in Hays April 18.

The team will continue the tournament Wednesday morning with an 8:30 a.m. starting time.

The golf team will be at the Mid-America Athletic Association Championships April 24–26. The event is in Spring Hill, Kansas. This will be the last event before the NCAA Championships.