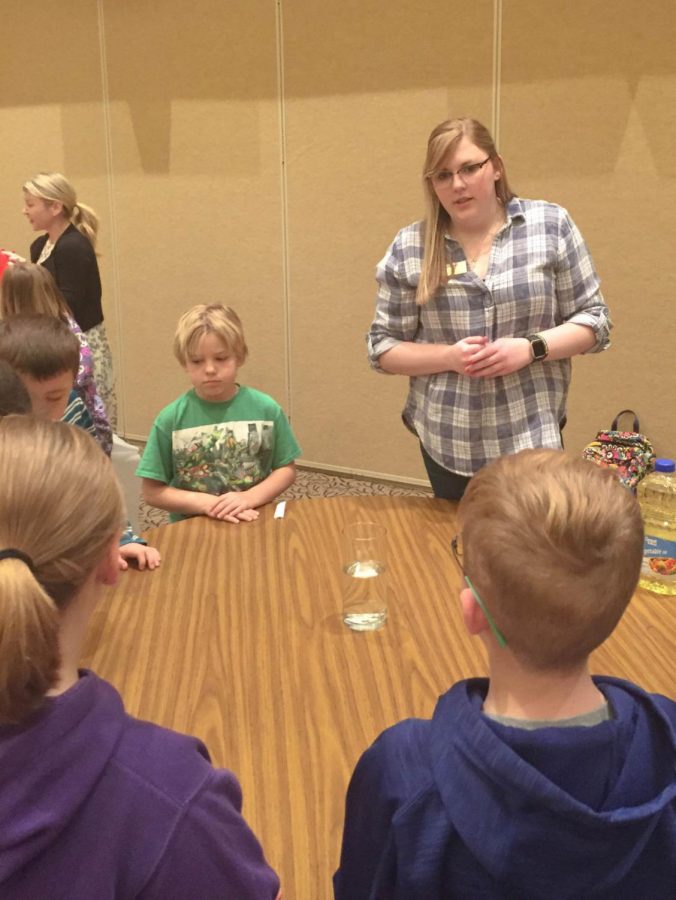 From rainclouds to harmonicas, around 80 second-grade students from Holton Elementary were able to experience science hands on at the first annual Washburn Science Fair.

The event took place in the Washburn A and B Room April 7 with the help of the department of education, all in the name of science and fun.

“The event is being run by students in the education department at Washburn,” said Cherry Steffen, chair of the department of education. “This is a way for them to practice their teaching skills, but also to bring the kids in and let them do fun science activities.”

Nearly six dozen second graders filled the room with eager faces at 9 a.m. Seven tables aligned the lecture hall, all with a different experiment for each designated group of students.

“One group of students is making a nebula in a jar to represent space.” Steffen said.

The tables were filled with an assortment of items, ranging from shaving cream to ice filled balloons.

As soon as the kids were given the green light, each table was filled and the teachers began their individual experiments.

“My favorite station was the one with the fireworks,” said one of the students. “I also liked making the rain clouds.”

One table saw an experiment with raisins and soda, where the kids were instructed to place the dried fruit in a cup of pop, demonstrating the effect of carbonation on the snack. The students watched the raisins as they danced from top to bottom, all the while having bubbles pop around them.

At the harmonica station, students were given the task of creating the instrument out of a popsicle stick, rubber bands and cut straws. As soon as they accomplished the experiment, a dozen different pitches could be heard circulating the room.

The rain clouds were of particular interest. The experiment required the second-graders to spray shaving cream into a clear plastic cup of water, then add food coloring on and around the “cloud” of shaving cream. Once the food coloring mixed with the cream, it drizzled down into the water, simulating a colorful rain cloud.

“We hope the science fair can become something we can do every year,” said Lisa Douglas, head of mathematics in the department of education.

For the student teachers running the experiments, the goal was to allow them to entertain the children, while practicing their abilities as future educators.

“This gives young aspiring teachers a chance to try out hands-on science experiments with real students, as opposed to a lecture classroom,” Steffen said.

Shelby Dodds, junior elementary education major, was able to test her skills as an educator first-hand during the event.

“To see a child’s eyes light up because of an experiment is one of the most rewarding things you could see as a future educator,” Dodds said.

However, the main focus is to get kids interested in science again, all in hopes of expanding the career field and the imagination of those who choose to go forth in it.

“For the second graders, the goal is get them excited about science,” Steffen said. “Frankly, careers in this day and age are all in S.T.E.M.s: science, technology, engineering and math, so it’s important for children to get early practice in these areas.”

As with any field of learning, the earlier the better when it comes to exposing kids to science, and doing so hands on adds an extra appreciation for the subject.

“We know from research that the earlier children get involved, the better chance it is that they’ll go into those fields,” Steffen said.

Whether the participants garnered a new love for science, or simply the experiments themselves, it was a unique method of learning for the second graders- one which brought the classroom to life right before their eyes.

“Our goal is to get these children excited about learning and just to not be afraid of science and math,” Douglas said.