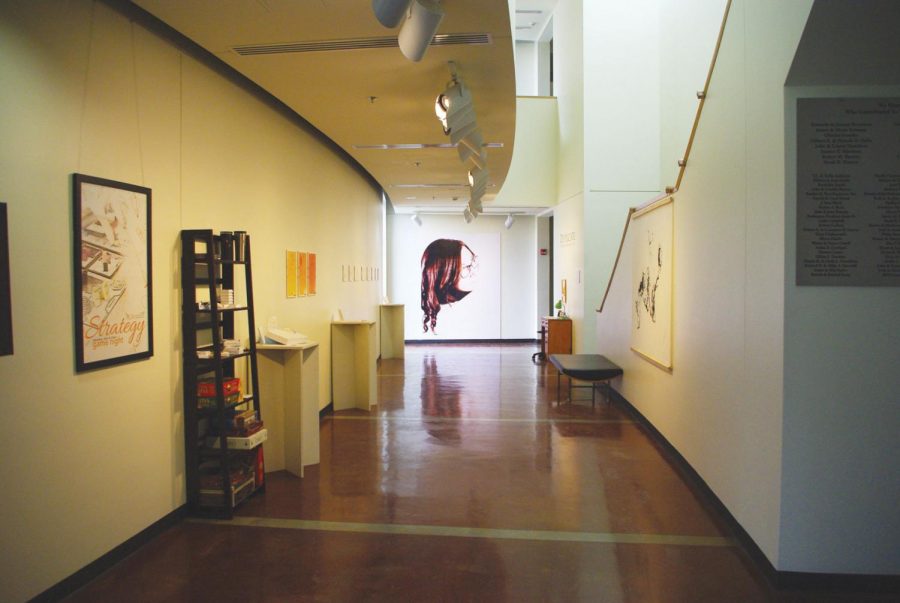 Gallery: Amber Coultis’ gallery, “Duplicate,” was open Feb. 27 to March 10. The gallery had pieces in multiple mediums, and some smaller ones were stolen.

Theft is a recurring problem at Washburn University – police report data shows that it accounts for an estimated one-fourth of all crime on campus – and unfortunately exhibits and classrooms in the Art Building are part of this statistic.

Various works have disappeared as Senior Exhibits have run their course. As a final project and chance to conduct a professional display, many senior art majors host a Senior Exhibit in the Art Building. Amber Coultis is one such senior who hosted a show last month called “Duplicate,” which featured conceptual designs including a layout and props from a futuristic space cafe. She reports that some of her pieces were stolen during her exhibit.

“My first week, I think it was that Tuesday, one of my lapel pins that I got custom designed for the cafe of its logo was stolen,” Coultis said. “The last Friday of the exhibit, I look up and one of my very first thermoses that I had designed for the project had been stolen.”

Coultis said that she had heard of previous incidents of theft during exhibits and she is frustrated the thefts are continuing.

“I spent a whole semester on that project,” Coultis said. “I was a little heartbroken. I put trust in people that they aren’t going to go pick up something from an art exhibit. It’s a sort of respect I don’t think everybody has for art.”

As mentioned, Coultis’ experience was not a singular incident. She noted that thefts have also been reported in the Art Building’s classrooms.

“Last year, the basic photo imaging class had these really cool [kaleidoscope] images printed on foam-core, and quite a few of those disappeared,” Coultis said.

Harvey Flowers, a student who was in that class, confirmed his foam-core work was taken, as well his backpack at a later time.

“Our instructor put them on display in the [upstairs] hallway and a week later it was just gone,” Flowers said. “[Another time] I set my backpack on the floor near a bench to use the restroom, thinking it was safe because of the security cameras. I forgot to grab it when we went to class and realized maybe an hour later that I had left it in the hallway. I went back and it was gone.”

Jessica McAtarian also reported that her guestbook for visitors to sign was taken during her December exhibit, “A Muse of Fire.”

“I had a small, leather-bound sketchpad for guests to sign,” McAtarian said. “I came in one morning and the journal was missing. I had to go get another one, and ask previous guests to resubmit their comments.”

“It’s a hallway gallery, which is nice because we get a lot of people looking at art, but you’ve got the flipside of that: an open building is an unsecure building,” Hager said. “It is a balance that changes. Sometimes we have no problems at all, and sometimes we have two or three semesters where a lot of things happen at once.”

He said the faculty have even had tools and art stolen from their classrooms.

“Our cabinet that holds all our tools was open, and on the floor was the lock that had been cut,” Hager said. “All the tools were there except one cordless drill and its case, and a reciprocating saw.”

“I’ve heard complaints from teachers and students alike that finished ceramic pieces, paintings and prints are stolen at the end of the semester off the shelves,” McAtarian said.

Hager said that for a long time, the Art Building did not have security cameras, but cameras were installed when a television was stolen from a wall in the Art Building hallway. He indicated this security is vital for students with exhibits to have an effective education.

“It’s our capstone,” Hager said. “Having a gallery space specifically for the students is a must. It’s looked at also as a very good and essential recruiting tool [for incoming students].”

Now, he believes further security measures may be necessary that may reduce the interactivity of exhibits. Disabling 24-hour access for art students may also be a last resort if rate of theft increases.

“When Amber had those pieces taken, it was kind of a wake up call,” Hager said. “There’s going to be only one solution to that, and that’s putting them under glass cases.”

Coultis said that she would like to see more support from the university for security.

“[The cameras] came out of the art department budget from what I understand, rather than the university paying for it,” Coultis said.

Alexis Simmons, the newly elected president of the Washburn Student Government Association, gave a statement today with a plan of action to combat theft in the Art Building.

“We are very glad students reached out to us about this,” Simmons said. “We plan to meet with WUPO and the art department to talk with them about student safety concerns within the Art Building. Students should feel their work is adequately respected, and part of that is going to be satisfactory security measures. We have no doubt the university will work with students to resolve this problem.”

Coultis also advised victims of theft in the Art Building to take action.

“I don’t think people understand that they can go to the police department on campus and report the thefts,” Coultis said.

Ultimately, Hager said that choosing interactivity or security in an exhibit is the artist’s call, and to know the risks.

“Where is the balance? There’s no answer to that,” Hager said. “You have to be aware that [art] is something other people want. If they want it bad enough, they will break the law to get it.”