The Washburn Review • May 29, 2017 • https://washburnreview.org/5293/features/pirates-of-the-caribbean-dead-men-tell-no-tales-justfies-ending-franchise/ 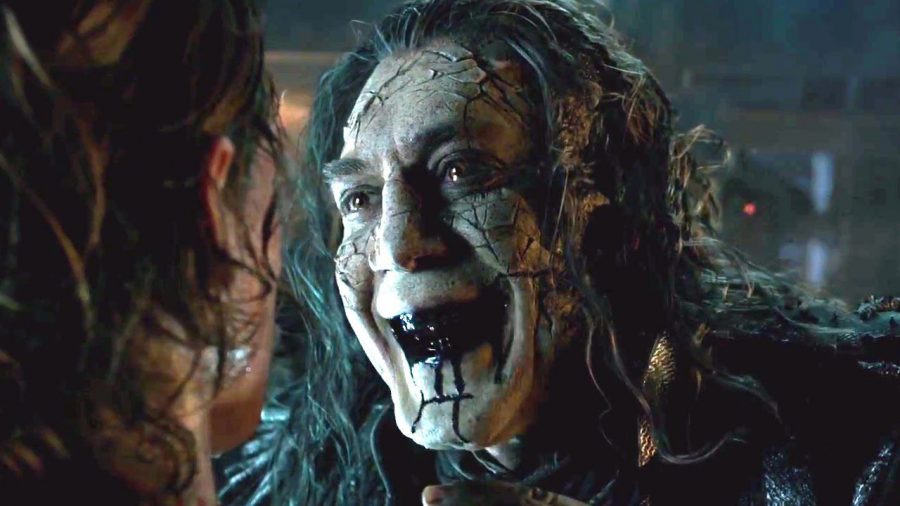 There comes a time when a franchise needs to die.

For the “Pirates of the Caribbean” movies, it was after the third film in the series. Despite “At World’s End” having an absolutely incomprehensible plot with a tonal attitude that flipped the franchise on its head, the franchise continued with “On Stranger Tides” which was so bad it retroactively improved the story of “At World’s End” and presumably ended any chance of another film in the series being made.

Along comes “Dead Men Tell No Tales” to bring back familiar and once beloved characters and do absolutely nothing with them. Not even a change in directors and the return of Orlando Bloom and Keira Knightley could save this overbearing and bloated sequel.

Henry Turner (Brenton Thwaites), the son of William Turner (Bloom) and Elizabeth Swann (Knightley), vows to find the Trident of Poseidon to remove the curse that ties his father as the captain of the Flying Dutchman.

While working as a crewman on a British warship, Henry encounters the undead Captain Salazar (Javier Bardem) who rules over The Devil’s Triangle. Salazar tells him that his crew’s undead state is the fault of Captain Jack Sparrow (Johnny Depp) whose mystical compass keeps them trapped in the Triangle.

Salazar leaves Henry alive to deliver the message to Sparrow. Eventually Henry meets Jack and both enlist the help of astronomer Carina Smyth (Kaya Scodelario) who knows the way to the Trident.

After losing his compass and allowing Salazar and his crew to leave the Triangle and chase the heroes, Jack, Carina and Henry, with the help of Jack’s crew and Captain Barbossa (Geoffrey Rush), must race to the Trident in order to remove the curse of Will Turner and stop Salazar from taking over the entire ocean.

The performances in this movie are incredibly amateur. Brenton Thwaites is quite possibly one of the most blasé actors on the market at the moment. His preceding performance as Bek in Gods of Egypt is no different than his role as Henry Turner.

His unenthusiastic and forced attempts at charisma cement him as an annoying and his ineptitude for proper delivery make me hope he takes some acting lessons before continuing his acting career.

Despite Scodelario’s minor roles in film she still seems to have the ability to be a commanding leading lady. Sadly, this film does not help her achieve that. Carina is presented as nothing more than eye candy or the check on the “we included a prominent female” box.

If she’s supposed to be the replacement to Elizabeth Swann, the filmmakers failed. She’s consistently annoying, has very few likable qualities other than her intelligence and ability to outsmart the men around her and she often gets herself in trouble when she tries to be brave and rescue others.

She’s a complete damsel in distress complete with overly revealing and pretentious costuming. The central love story between Henry and Carina lands with a flat dud not because it’s poorly written, but because these two characters are poorly conceived leads.

Among the rest of the cast is Javier Bardem hamming it up as an over the top villain, seemingly mixing in elements of Bill Nighy’s excellent Davy Jones and Bardem’s own turn as James Bond villain Raoul Silva. Bardem only gets a pass simply because it’s almost impossible for him to give a poor performance. Even so, Salazar is a waste of villainy. A poor mosh-posh of other, more compelling villains.

My favorite character of this franchise has always been Barbossa, but the character is totally wasted in this film. His appearance is so unnecessary and his story arc for the film ends so poorly that most of my distaste towards this film is how poorly these filmmakers understand what makes Barbossa fun and iconic.

There is also of course Johnny Depp. All I can is that three failed movies have really cemented that Sparrow is quite possibly the most overused and exaggerated character in film existence. It’s come to a point where it’s almost a chore trying to enjoy or care for Depp’s campy and on the edge of annoying performance as this character.

Despite this, he is the only bright spot of the film. Where Carina, Henry and Barbossa fail, Jack succeeds. He’s still funny and his portrayal feels consistent to the other parts of the character. Still, I’m pretty tired of Captain Jack Sparrow’s antics.

Let’s not ignore the film’s multitude of plot issues as well. For one thing, Jack’s magic compass, which could help Henry find the Trident is thrown away by Jack simply so he can obtain a bottle of rum and then it turns out that Jack losing the compass is also the exact thing that helps Salazar and his crew escape the Triangle.

Also, the film goes to great lengths introducing a journal that details how to find the Trident but the answer is right on the cover and nothing inside is actually used. Not to mention them finding the location is less calculated and informed and more complete luck.

Then the film reveals a big twist about the actual identity of a character that caused an audible groan and a cringe to emanate from the recesses of my being.

The film isn’t all bad though. Besides its final scene, which packs way too much in over the course of about four minutes, the action is consistently enjoyable. A bank robbery scene that finds Jack’s crew dragging a safe, along with the entire bank, through cobbled city streets feels directly pulled from a “Fast and Furious” movie, but it is quite fascinating and fun to see it in an older time period.

None of these scenes top anything in the previous “Pirates” films, though, meaning the action you will be seeing isn’t exciting enough to justify a ticket purchase.

There is also the occasional funny moment that provides quite a chuckle. Especially from Jack who continually mentions how dissatisfied he is that Elizabeth chose Will as her lover instead of him.

Finally, the movie does look incredibly impressive. Salazar and his zombified crew look incredible as they run through murky water to climb and murder all those who dare cross their path. Their gait and constantly floating hair excellently captures the terror they invoke.

Even still, none of these positive qualities make “Dead Men Tell No Tales” a worthy return to this franchise. The acting is poor, characters are wasted, the plot is contrived and confusing and its tone is messy.

The first film will always hold a special place in my heart and overall the first three films are a pretty solid fantasy, swashbuckling trilogy. However, it is a joke to think these movies should under any circumstance continue. To Davy Jones Locker with this franchise.