The Washburn Review • May 24, 2017 • https://washburnreview.org/5277/news/art-exhibition-makes-visitors-look-create-and-understand/ 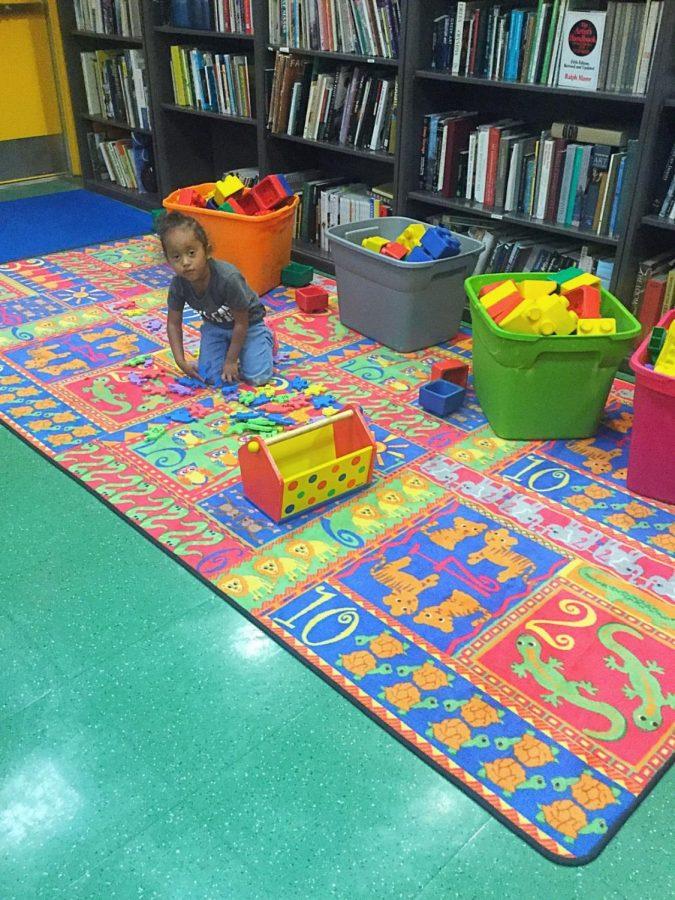 Getting creative: Emery plays with the elephant figurines in the Mulvane Art Lab.

Young children spent time to create whatever their boundless imagination allowed in the Mulvane Art Lab in Garvey for the Family Day, Art & Self Identity program on May 20. Parents and guardians assisted them as they painted, built and cut. The program supplemented the larger exhibition, “For All the World to See.”

“For All the World to See” was an exhibition that aimed to show how art can shape perceptions of a certain group, and how it did exactly that in the Civil Rights movement. Ongoing since April 7, the exhibition was inspired by two things: the story of Emmett Till, who was unjustly lynched for reportedly whistling at a white woman, and Gordon Parks, who used films to portray the struggle Africans American had to go through in a racism-filled America.

It was full of memorabilia such as posters, video clips, and advertisements from that era. All of them prompted visitors to think about how images were used to shed either a negative or positive light on African Americans in the movement, with some posters even directly asking the viewers questions like, “How did hostile imagery become a part of everyday life?” and “Does it matter who creates the image?”

While the exhibition gave an extensive look into complex topics like racism and visual rhetoric, it was not completely geared toward adults. Interactive brochures cued children to ponder such topics via questions and drawing activities, and part of the group in the Art Lab was comprised of the children who had been to the exhibition. The energetic children occupied the multicolored room, each busy in the section that interested them. There was a toy section with giant Lego blocks and figurines and a painting section with all the art tools. There was also a pop-up museum in place where people could pin pictures of their families.

Some families had decided to visit the Art Lab first.

“I just brought them here first so that they wouldn’t get bored,” said Jean Hazelwood, grandmother of Morgan, three-and-a-half, and Kaiden, seven.

Her grandchildren were busy going around the room exploring what they could do with the tools that were provided.

The creativity was evident in the artwork the children were producing. One of the children, a three-year-old named Emery, was weaving an amusing narrative about familial relationships in a herd of elephants whilst playing with elephant figurines. Over at the table with the art supplies – paper, paint brushes and crayons – Washburn student-helpers were teaching children about the emotions images can invoke and how different colors can represent different strands of emotion.

The plan, according to Tom Anderson, Education major, was to make people take a look at the exhibition, then make them come down to the Art Lab and create art. Finally, to help them gain an understanding of the art process and how art can affect impressions people have of a topic, the Washburn students took visitors through the process of making rhetorical art. Although people did not follow that exact cycle, they did, as Anderson put it, “look, create, and understand.”