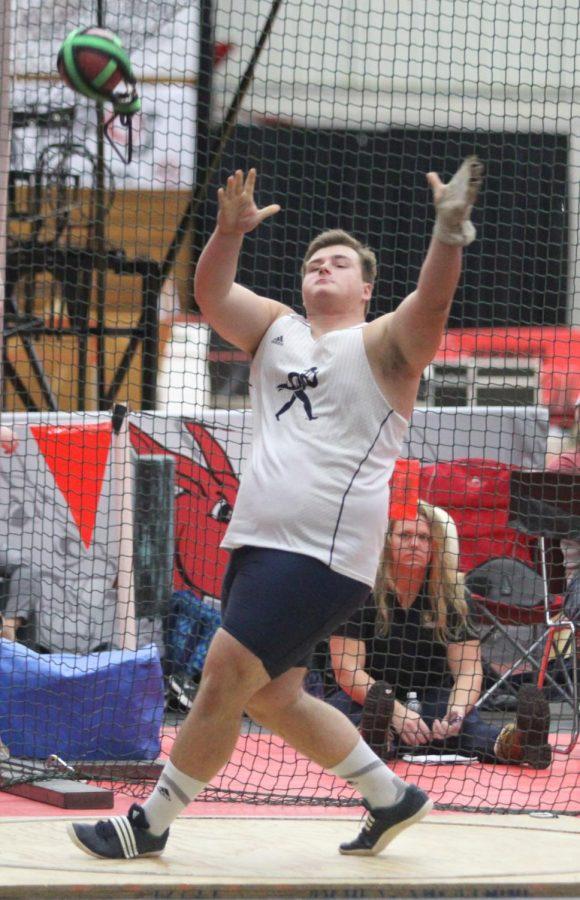 Michael Majors competing in shot put. Majors is a sophomore planning to major in business.

Washburn University’s men’s and women’s track and field teams won several victories in their comeback season, setting a number of new records along the way.

The first season of track and field for Washburn University in decades started with the Pittsburg State Crimson and Gold Invitational Dec. 10.

The highlights of the day were several high placing finishes by Ichabods and 22 school records falling. Jacob Klemz won the 5000m men’s run.

In the pole vault, Allexis Menghini placed third and qualified for the NCAA Indoor Championships.

The Ichabods earned eight more top 10 finishes throughout the rest of the day. Michael Majors placed fourth in shot put.

At the next meet, the UCM Invitational, two jumpers, Zach Skimbo in the high jump and Kevin Norville in the triple jump, put up numbers that qualified them provisionally for the Indoor Championships. Five more records were also re-written.

Following that, the team went to the Pitt State Relays, where they set another seven school records. They competed next at the UCM Relays, where three more records were broken and Allexis Menghini bettered her NCAA qualifying numbers.

The team was already off to a solid start, but their performances peaked at the Southern Missouri Lion’s Den Open. The women’s relay team, Jacob Klemz in the 3000m, Kelvin Keter in the 800m and Courtney Freed in the 600 yd all placed first in their respective events, along with several top five finishes for the rest of the team. Menghini again bettered her qualifying numbers and was joined in NCAA qualification by Kelvin Keter.

A small team went to the KSU Open and one more school record was written during the meet. Then, the teams went to the Indoor Championships. The men’s team placed 10th while the women’s team placed 12th. A few more records were broken and Jacob Klemz earned himself a NCAA qualifying time and an All-MIAA selection.

The runners rested for the winter, preparing to return in spring. When they did return, they went on to set school records 28 times throughout the outdoor season.

At the MSSU Last Chance Qualifier, Jacob Klemz and MaKayla Kueser both won their events, and Kelvin Keter and Paul Alongo both finished second.