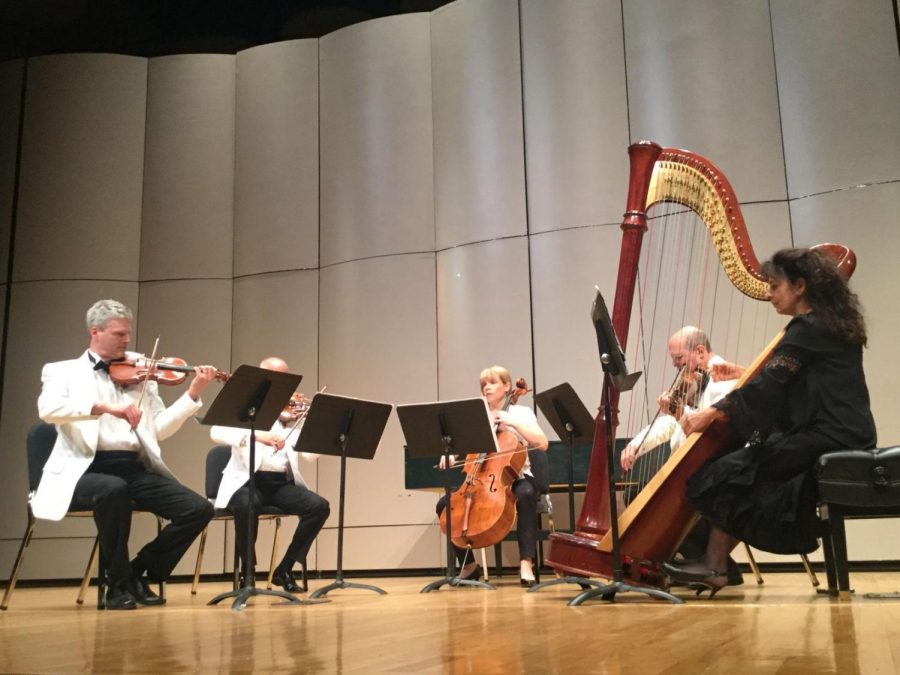 Sunflower Music Festival was a fitting name for the orchestral concert series, as people—like sunflowers to sunlight—swayed to and turned their bodies toward the music while observing consummate musicians clad in white or black play compositions of renowned musicians of the past.

Arnold Bax’s piece featured, most prominently, the harp played by Rita Costanzi, a Vancouverite who has previously performed at the Sunflower Music Festival. Other sounds came from Eric Tanner’s and Robert Schumitzky’s violins, Mark Tukh’s viola, and Erin Breene’s cello. “The whole piece, contrary to what it says on the program, is not three movements. The three sections blend seamlessly, actually,” said Eric Tanner when introducing the piece to the audience.

The next piece, “Sonata No.5 in F Major, ZMV181”, was introduced by Catherine Larsen-Maguire, bassoonist and guest conductor for the Festival.

“This piece is notoriously famous among bassoonists and oboists because first of all, it is very taxing to play; it has many harmonic twists and complicated counterpoints. There are many things going on at once,” Larsen-Maguire said.

Apart from Larsen-Maguire on the bassoon, other musicians were Gordon Hunt and Margaret Marco on the oboe, Nicolas Tsolainos on the bass, and David Allen Wehr on the harpsicord. The difficulty of the piece showed in the musicians’ faces as they looked exhausted—faces red and out of breath—after each of the three movements.

For the last piece, the audience experienced a perfect rendition of Beethoven’s “Symphony No.2 in D major, Op.36.”When asked what she thought about the concert, one audience member, Nancy Kirk, said, “It is hard to find music of this caliber”

The concert was followed by a talk-back session with the musicians which produced interesting dialogue. Larsen-Maguire talked about the evolution of the bassoon, explaining how bassoons of the past were even harder to play.

Costanzi talked about how the harp is a beautiful instrument. A discussion about the involvement of young people in classical music also ensued.

Claudio Jaffe, celloist said, “It is the way it is. Young folks don’t enjoy old music,” while some of the musicians argued that free concerts and accessibility were the ways to garner interest from young people.