Guns on campus: What you need to know 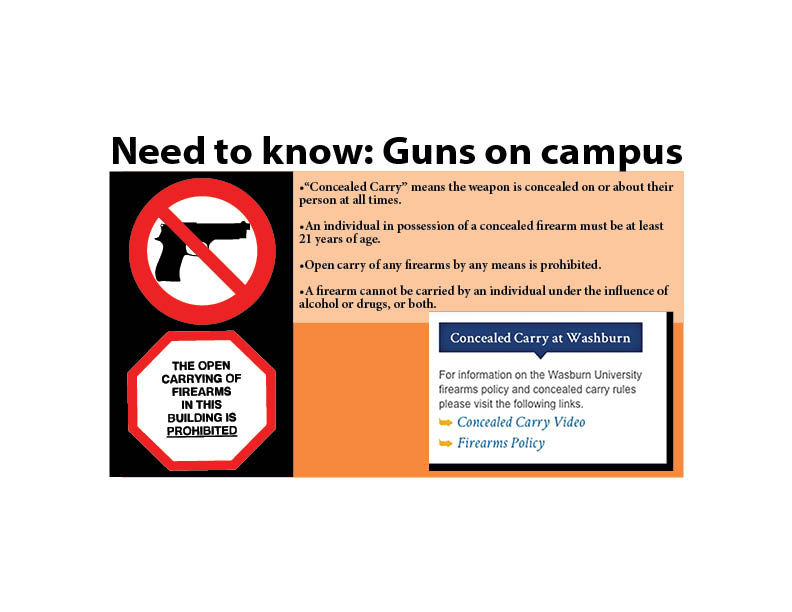 Beginning this semester, nearly everyone over the age of 21 will be allowed to legally carry a concealed handgun on Washburn’s campus.

The Personal and Family Protection Act, passed by Kansas Legislature in 2006, will allow most 21-year-olds in the state to carry concealed weapons with a license. In 2013, the concealed carry law was extended to include carrying in any “state or municipal building,” according to the Kansas Attorney General’s website.

Originally exempt from this 2013 change were post-secondary institutions, or colleges and universities, including the campuses of Washburn and Washburn Tech. This exemption only lasted four years and expired on July 1 of this year.

Because of the expiration of this exemption, many groups, leaders and organizations have been preparing for the possibility of seeing guns on campus.

The Washburn University Police Department is utilizing its many resources to help get information out in regards to this policy to the general public. There is a link on the right hand side of its website that lays out the policy in detail.

“Our policies mirror that of K-State, KU, Wichita State and others,” said Chris Enos, chief of WUPD. “The university counsels of all the state schools got together and came up with common policies that would be uniform across the state.”

Enos said the most important thing people can do is familiarize themselves with the policies, but he placed particular emphasis on two.

“The two most important things about the policy is that you must be 21 or older and that open carrying of a firearm is prohibited,” Enos said.

Enos also said he believes that even though the law and policy don’t mandate it, if anyone is thinking about carrying on campus, they need to understand the law and the policy. They also need to be aware of the responsibility that comes with carrying a concealed weapon.

WUPD is currently working with various groups on campus to train them on the conceal and carry policy. They have been tailoring their training to each group’s specific areas on campus.

“We talked recently with kinesiology for instance,” Enos said. “You could imagine for them it could be interesting. If they’re teaching swimming, the situation might be different than if they’re teaching kickboxing.”

Another group that WUPD recently presented to was Residential Living.

“Chief Enos came and talked to us about the policies about things like proper storage,” said Doralynn Mellinger, senior nursing major and RA for Lincoln Hall. “We know that the only time it should be seen is when you are moving from your person to storage.”

The information that RAs received was passed on to the residents in their mandatory meeting along with other safety precautions and rules.

Mellinger also said WUPD let the RAs know that if they had any issues they should call them.

Alexis Simmons and Scott Weinkauf, Washburn Student Government president and vice president for the 2017-2018 school year, made it a point to talk about the issue during their campaign last semester.

“We talked a lot about promoting education on the gun policy,” Simmons said. “Having a solid foundation for students to build opinions off of is crucial in encouraging discussions on campus.”

Simmons said that educating students about the policies is something that WSGA is going to continue to do as the semester begins.

“We’re working with other universities to see which form of education works best in addressing this issue,” Simmons said.

WSGA is also working on setting up a panel made up of various groups on campus, such as WUPD and University Counsel to discuss these issues.

Simmons and Weinkauf also emphasized the need for Washburn students to understand and be more aware of what is going on at the Kansas statehouse, especially legislation that affects students.

“Bills are being presented every day that students may not know much about,” Simmons said. “Students are busy with classes and might not have time to read the news. We’re trying to build that bridge so that students know what is going on right down the street and understand that that is going to impact their lives regardless of where they are in the state.”

Simmons and Weinkauf hope the new gun policy in particular can help keep the students more aware of what’s happening at the capitol and that overall this policy will keep students more engaged in politics and university policy.

“Many people are passionate about this issue,” Simmons said.

Simmons hopes that this passion can be tapped into and that with that real campus engagement is possible.