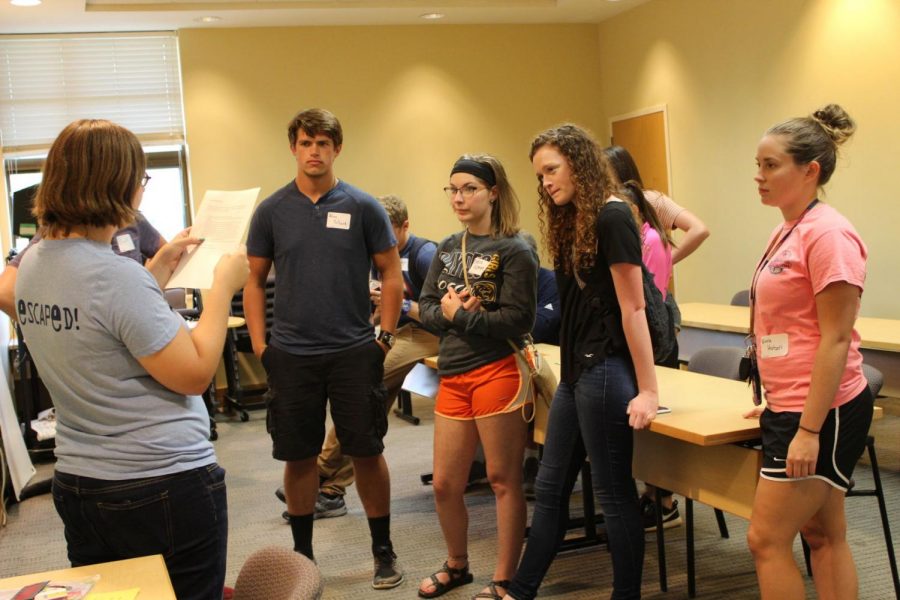 The Washburn Leadership Institute hosted an escape room event that was free for Washburn students Aug. 27.

A part of the Leadership Institute’s annual fall student orientation, the event acted as a mixer for new and returning students to meet and compete in teams.

Cydny Fox, this year’s orientations and homecoming team leader, was in charge of organizing the escape room event. Fox’s positive experience visiting a professional escape room inspired her decision to assemble one of her own.

“I have only been to one escape room and it was a blast,” Fox said. “It’s something people get to work together on and you get to see a lot of people’s leadership styles really come out.”

An escape room is a closed-off location, normally a single room, where a team must work together to solve a series of hands-on puzzles in order to escape before time runs out.

These rooms often base their puzzles around a theme and Fox chose to design each of her rooms around one of two themes: Egyptian mummy and deadly virus.

Fox was happy with the turnout of students at the event.

“This is actually our largest number of RSVPs we’ve ever had,” Fox said. “We had 140 students RSVP, so we like to joke that we’re breaking the world record at orientation, but this is a great number. It was definitely more than we were expecting, which we are super excited for.”

“I have been to multiple escape rooms,” Nyman said. “I planned an entire event around an escape room recently. I have escaped from every one [that I have taken part in.]”

The Leadership Institute began the event by serving free food and gave a presentation about their organization’s goals and how students could become a part of it. Afterwards, participants were separated into teams and guided to one of the two escape rooms: the deadly virus room with a one hour time limit, or the Egyptian mummy room with a 30 minute time limit. Regardless of each team’s success or failure, they were then shown to the second escape room and allowed to attempt it as well.

Nyman was impressed with how the escape room event as a whole.

“I feel it was a really good team building exercise,” Nyman said. “We executed it kind of badly, but that’s okay. I feel that we did get a lot accomplished. It was definitely something I want to do again.”