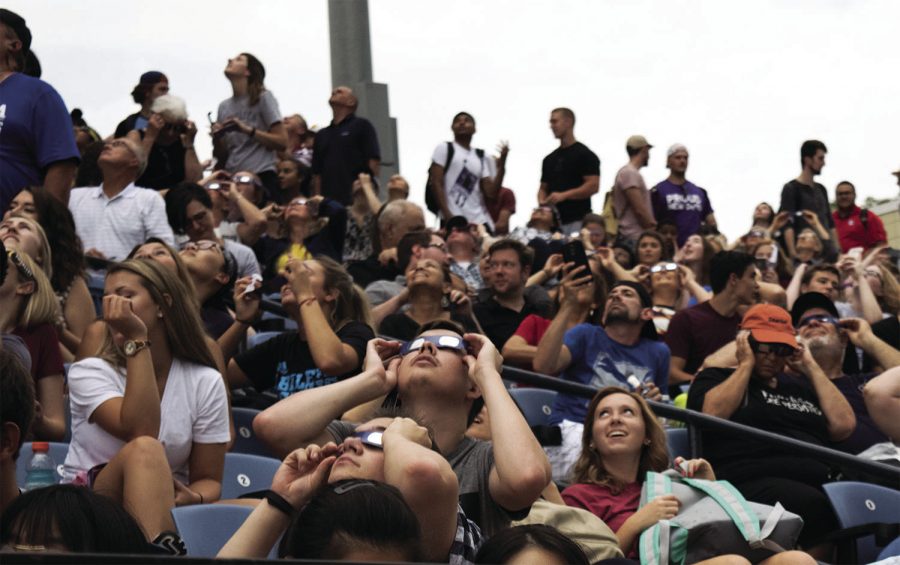 Eye to the Sky: Washburn students gather together at Yager Stadium to view the solar eclipse. Despite the cloudy weather, Ichabods were able to catch brief glimpses of the event.

Despite a cloudy afternoon, Washburn hosted thousands of students, faculty and members of the Topeka community during the Aug. 21 total solar eclipse.

The historic event was viewed all over the country. Washburn celebrated the milestone with an viewing event, held at Yager Stadium, hosted by University Relations.

“We started planning for this in the summertime,” said Patrick Early, director of University Relations.

Early said one reason the university decided to host the viewing event was to celebrate the historic eclipse with the students who were starting their fall 2017 semesters on the same day.

“This is a great educational opportunity, not only for students but for the community,” Early said.

Safety when viewing the solar eclipse was a high priority and something that the university kept in mind from the beginning.

In order to ensure that everyone who wanted to participate was able to do so safely, University Relations ordered 6,000 eclipse glasses to be distributed free of charge throughout the day.

“A lot of people don’t realize that where we are, around 99 percent totality can be the most dangerous place to view it,” Early said. “Just that small crescent of the sun can damage the eyes.”

Larry Griffiths, a local Topeka resident, came to the event after learning about it through Facebook.

“We had a partial eclipse a couple of years ago, and I met the head of the astronomy department,” Griffiths said. “I was hoping to see him again today, but I think he went up north to see it better.”

Griffiths was happy with the community’s turnout and overall enthusiasm for the event in spite of the weather.

“I know it’s been cloudy most of the day,” Griffiths said. “So I’m glad to see a decent sized crowd.”

International students also voiced their excitement for attending Washburn this fall, as their choice of a school in Kansas allowed them a better view of the solar eclipse than they would have had in their home countries.

“It’s really cool,” said Jimena Burt, sophomore elementary education major and Paraguay international student. “I don’t think this will ever happen in my country so I’m glad I’m here. I love that they made a huge event out of this.”

Later that same day, President Jerry Farley shared his impression of the event with the freshman class of 2021 during covocation.

He said that despite the clouds making it more challenging to view, he still thought experiencing the brief moment together in Yager Stadium at Moore Bowl created a sense of awe for all who were present.

Washburn students, faculty, staff and community members alike will remember the crowds gathered with excitement for this once in a lifetime opportunity.