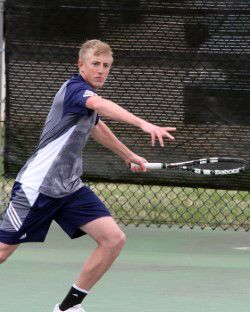 After four years of building up the program at Washburn University, Lance Lysaught, men and women’s head tennis coach, is now preparing his teams for the new season with the goal of winning a conference tournament championship.

“We want to win the conference tournament and it is a huge battle,” Lysaught said. “We were so close last year.”

The men’s team had a remarkable season last year. The men ended with a 16-5 overall record, an undefeated record at home, as well as a 3-2 conference record. They also earned a milestone win against fellow Division I in-state opponent Wichita State.

With that impressive record, the Ichabods had a great chance to get to that goal of winning the conference tournament, but there is one hurdle that seems to be in the way.

“Northwest Missouri State has won the conference tournament nine years in a row,” Lysaught said, “We were close to beating them last year in the finals, so once again you are looking at beating two top nationally ranked teams to win your conference.”

With such a competitive conference, reaching the title at the end of the season will be a challenge on the men’s side, but some new additions to the team look to help attack those top teams. Raul-Alin Dicu is a freshman from Arad, Romania along with freshman Bradley Eidenmeuller from Alsbach, Germany.

“They are both six foot three, so we kind of have a tall men’s team,” Lysaught said.

Along with these new additions on the men’s side, there are great returners with experience looking to help push the men’s side to the top of the conference.

“We lost Matt Barlow, but now he is our assistant coach, but our men’s team is very deep,” Lysaught said, “You have four-time state champion Tommy Hunter, and two All-Americans Blake Hunter and Alejandro Valarezo.”

Along with the men’s side, the women’s side were extremely close last year to winning their conference tournament. In fact, the men and women both reached the NCAA Central Regional, which is the first time in seven years according to Lysaught.

The women’s side had an equally impressive season as the men. They reached an overall record of 13-9 last season, held an impressive road record of 6-2, and put up a 5-4 conference record via wusports.com.

Even though the women are losing a crucial part to their team in All-American Madeline Hill, they have gained an outstanding prospect in KU transfer Alexis Czapinski who is now eligible for the 2017-2018 season.

“We are looking forward to being right there in major competition this season on the women’s side as well,” Lysaught said.

Last season, the women hit some major benchmarks as they attempted to win the conference title. One of their benchmarks was a major upset to the University of Central Oklahoma in the first round of the conference tournament along with a valuable win against Rockhurst in the regular season.

“On the women’s side you have Northeastern Oklahoma, and then you have Southwest Baptist,” Lysaught said, “those two are always around top 20 in the national ranks, and now the University of Central Oklahoma has reached top 50 nationally.”

“I would love for the women to be nationally ranked. We knocked off a national team last year and we have beat Rockhurst which beat Drury University who were ranked 15th in the nation, so the potential is there,” Lysaught said.

One general message expressed by Lysaught was the importance of getting that conference title on both sides, which he hopes to accomplish.

“We want to win that conference championship,” Lysaught stated.

The men’s and women’s sides begin their individuals tournament play this September in the Wheatstate Fall Classic on Friday, Sept. 8 and Saturday, Sept. 9 at Kossover Tennis Court in Topeka, Kansas.