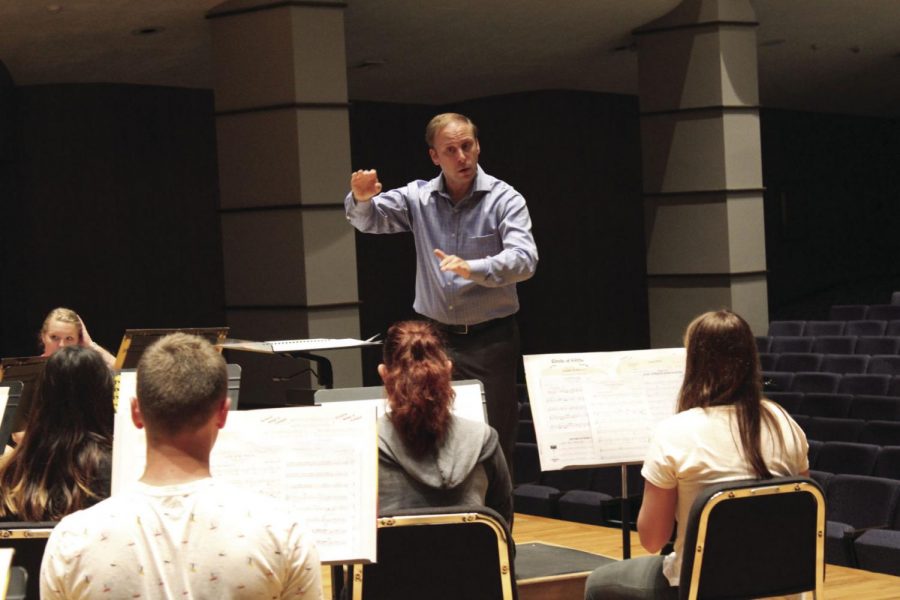 Conducted: Robert Schwartz directs the Washburn Wind Ensemble in "Lux Arumque" by Eric Whitacre. The Wind ensemble is one of several bands under Schwartz's direction.

A lifelong musician, Schwartz had ambitions of teaching music from a young age.

“I always knew that I wanted to be a teacher ever since seventh grade,” Schwartz said. “Music was always something that I really had a passion for.”

While he originally wanted to be a saxophone instructor, Schwartz discovered his love of conducting while completing his undergraduate degree and decided to pursue that career path instead. He initially got his start teaching music through working at various middle schools and high schools in Pennsylvania. He said that working with those students was what led him to pursue his master’s degree in wind conducting at the University of North Texas. Shortly thereafter, he began his doctoral pursuits at Louisiana State University, completing his degree at the University of Colorado. Schwartz then began working at a university level at Drake University before coming to Washburn.

When asked about his first impression of Washburn and the music department, Schwartz said that he has had a positive experience.

“I think it’s fantastic,” Schwartz said. “I am overwhelmed with how welcoming the faculty and students are.”

Schwartz is no stranger the worlds of education and music. He grew up in a family of educators and musicians, his grandmother being a social studies teacher and his grandfather being a band director and saxophonist himself.

He cultivated a deep appreciation for music and conducting in his college years, and hopes to inspire his students as well.

“My goal is to share that repertoire and my passion for it with the students that I’m teaching,” Schwartz said.

His goals are to provide opportunities for Washburn students. Schwartz intends to bring about an atmosphere of camaraderie and success within his band and help all of his students become better musicians together.

Band practices have already begun in preparation for the upcoming season, and the band’s new director is eager to lead them towards success in the coming competitions.