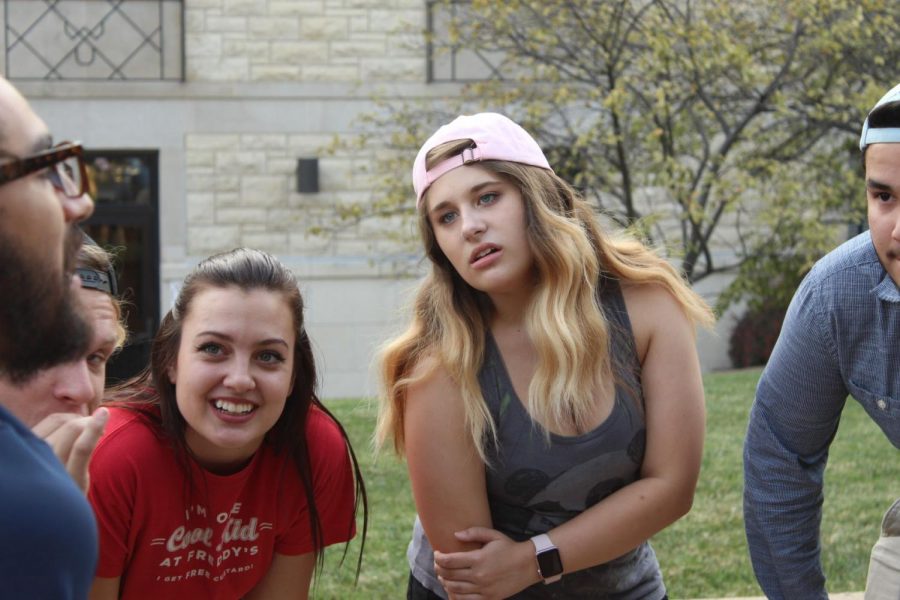 There's cause for disagreement on who is the "baddest biker"

Improvisation is a difficult, interactive art form and it’s making waves at Washburn.

Up to No Good Improv was started by CJ Williams, theater major, who felt the lack of improvisation troupes in Topeka needed to be rectified. The troupe of improv actors is made up of nine Washburn students, Williams, Isaac Bird, West Everts, Tracy Bell, Isabelle Smallback, Claire Hartman, Sage Pourmirza, Denilson Lopez and Michael Anschutz.

The group was formed in hopes to changing the artistic and comedic landscape of Topeka.

“It was mostly about bringing something new to Topeka,” Williams said.

Bird agreed and said that he enjoyed the community engagement of improv shows the best.

“It’s all about enriching the culture,” Bird said. “You leave behind expectations and laugh along with strangers.”

One of the troupe’s favorite games is called “new choice,” a warm-up exercise before the official start of their shows. The game always starts with a random scenario and character assigned to each actor. As they make up the story together, Williams will randomly call out “New choice!” and make whomever last spoke come up with a new line until Williams is satisfied. This often results in ridiculous, hilarious scenarios as the actors are forced to come up with ideas in quick succession while still trying to make the story make sense. The game only ends when both Williams is satisfied with the actors’ last responses and the story reaches a natural conclusion.

One of the scenes Bird and Hartman acted out in demonstrating the game had the entire cast rolling with laughter as they acted out a mother teaching her son to fish for the first time. Both actors were animated enough that the screwball scene was easy to follow and visualize without the use of props.

After the exercise was completed, Williams switched up the setting by taking the troupe out onto the campus lawns to play more improv games for practice. This drew more than a few surprised looks from passing students that overheard an improvised argument between the actors arguing nonsensically over who was the toughest member of a biker gang.

The group is excited to perform for the Washburn community and share their love of improv. Their next show will be 8 p.m. Oct. 6 in the Andrew J. and Georgia Neese Gray Theatre.