Help for rebuilding after destruction of Harvey 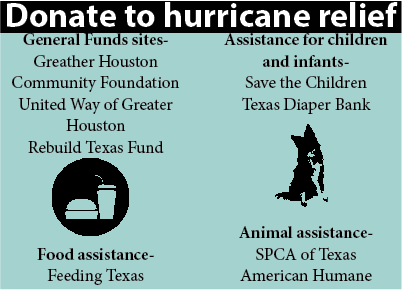 As the waters begin to recede in Houston and other parts of the Gulf Coast region, people are wondering the best way to help those affected by Hurricane Harvey.

The Texas government alone has requested assistance from the Federal Emergency Management Agency for 43 counties as of Sept. 4, according to a press release issued by Governor Greg Abbott’s office. Louisiana’s government requested similar funds in the following days. President Donald Trump issued his own releases Aug. 25 and 28 authorizing the funds that were requested from both states.

Many individuals, corporations and nonprofit organizations have pledged their support. The Texas based Michael & Susan Dell Foundation, the philanthropic organization set up through the CEO of Dell Technologies, Michael Dell, has pledged to donate $36 million into the Rebuild Texas Fund. This fund was established with the intent of doing what its name implies, rebuilding the state in the aftermath of the this storm according to the fund’s website.