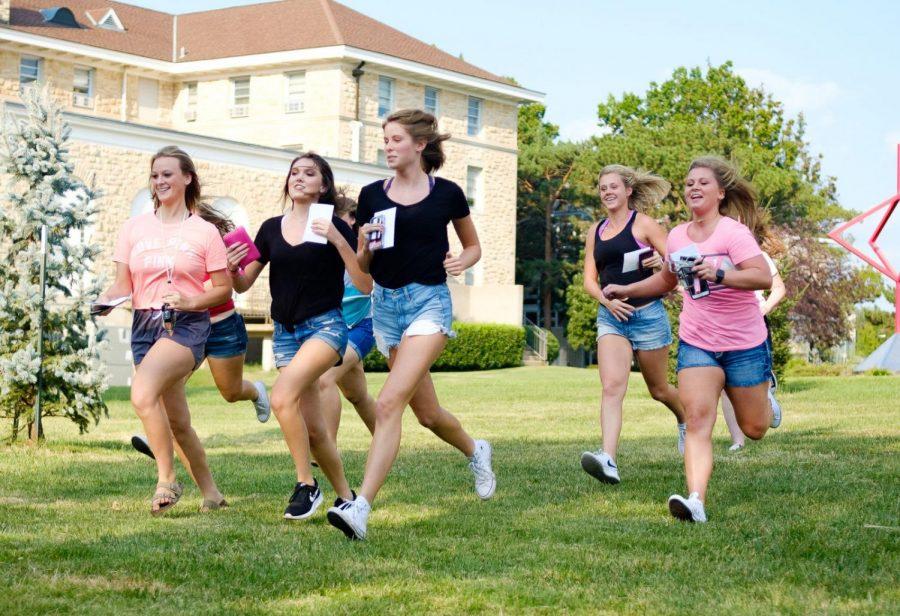 Washburn’s sorority recruitment came to an end Sept. 9 as new members ran down the infamous hill in front of the Henderson.

A time-honored tradition at Washburn, sorority members waited at the bottom of the hill to embrace their new sisters at the end of their run.

The last day of recruitment, Bid Day is when potential new members receive bids to join chapters of local sororities before they become official members.

Every student who is eligible to participate in recruitment is considered for the selection process by Washburn’s three current sororities: Alpha Phi, Delta Gamma and Zeta Tau Alpha.

The Friday before Bid Day, potential new members were given the chance to tour each of the three houses. Touring each house and getting to meet its members play a large role in new member’s decision as to which sorority they would like to become a part of.

“The best part of recruitment is getting to talk to other girls and getting to know them,” said Shayley Lust, sophomore member of Alpha Phi.

In conjunction with fostering sisterhood and lifelong friendships, an integral part of being a member of a sorority is giving back to the community. After the meet and greet at each house, the three sororities explained their philanthropic purpose: Alpha Phi’s Cardiac Care, Zeta Tau Alpha’s on Breast Cancer Education and Awareness and Delta Gamma’s Service For Sight.

At the end of the day, potential new members took all of these factors into consideration and decided which sorority would be their best fit.

Sept 10, potential pledges waited as they hoped to get into the sorority they chose. Both Alpha Phi and Delta Gamma both added 34 new members into their sorority, and Zeta Tau Alpha added 31. The new members participated in the run down Henderson’s hill and were welcomed with open arms by their new sisters.

“Recruitment was a nerve wracking process,” Manske said. “But running down the hill on Bid Day toward so many amazing DG’s that I was able to talk to during recruitment was amazing. I wouldn’t change it for the world.”