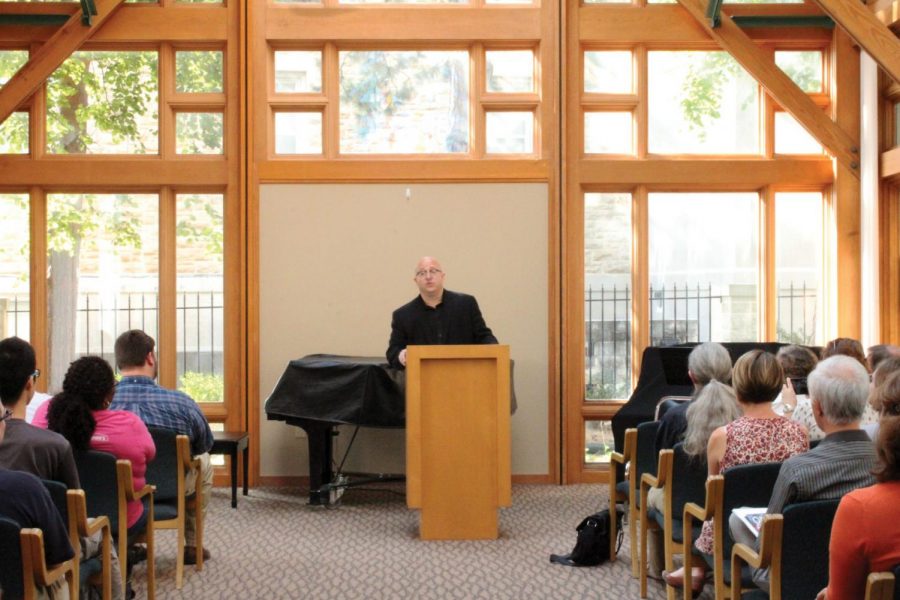 The eh team:  Professor Farkas reads his short story, ‘Imaginary Girlfriends of Canada.’ Farkas has done readings in the past and always enjoyed them.

A crowd gathered to listen to Andy Farkas, assistant professor of fiction writing, as he read his latest short story “Imaginary Girlfriends of Canada” Sept. 23 at Carole Chapel.

Yuxin Fu, English major, attended the reading and enjoyed the humor and honest introspection that came from the author.

“[Farkas] is excellent,” Fu said. “I like the way he wrapped [up] the poet, the humor and also the deep meaning of the poet.”

While Farkas is a new addition to Washburn’s faculty, this event was not his first time publicly reading his work.

“I have always enjoyed giving readings,” Farkas said. “I feel like the one today was great. It was great to see a bunch of people come out and it was a good audience.”

When asked what his favorite aspect of public readings were, Farkas said that he enjoyed the community engagement and the interactive experience.

“I feel like readings can be really exciting,” Farkas said. “Even though we don’t always necessarily always think about that. People who aren’t in the creative writing world don’t think about readings as a thing, but I feel like they absolutely can be. It can be a very different experience of the work.”

Farkas said that his fictional short story had multiple inspirations, such as the short story “Paraguay” by Donald Barthelme, author Jorge Luis Borges and the film “Last Year at Marienbad.” These works and authors are each known for their unconventional story-telling.

When asked if Farkas’ work had left an impression upon her, Fu said that it inspired her to experiment with different writing styles and organization.

“The way that [Farkas] organized the piece [and his word choice when writing the story] is quite different from what I would have done,” said Fu. “It’s a lesson for me to learn how to express more than I want to talk about in a different way from my usual one.”