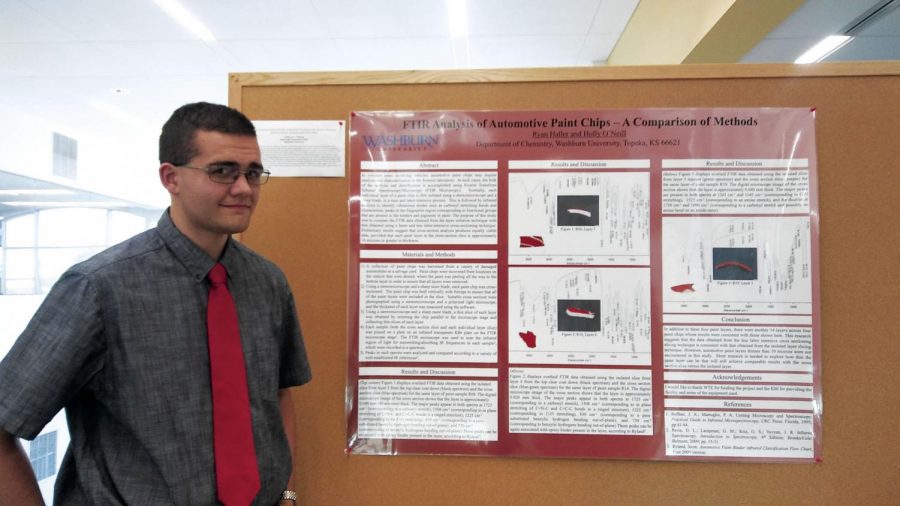 Chipper: Ryan Haller, chemistry major, displays his research on paint chips from cars. His research focused on how these methods can be used to determine different makes of automotive vehicles.

Students gathered in the Kansas Bureau of Investigation building for the Career Fair and presentations of forensic science research done in Kansas to complete the Kansas Forensic Science Week.

Booths were set up in the lobby, displaying information about the qualifications needed to work in the forensic science field. In between DNA models and detailed displays of latent prints, representatives from Emporia State, Johnson County Sheriff’s Office Criminalistics Laboratory, Sedgwick County Regional Forensic Science Center and the Washburn Forensic Science Department interacted with students. The KBI also spoke to the public about their specific departments.

The second floor rotated between six different sets of, research by both students and researchers in the field of forensic science. All of the research was done in the hopes of expanding the possibilities of how science could be used in a courtroom.

The individual disciplines for each study varied drastically in their approaches and their research focuses. Even from just Washburn, the subjects were as wide-ranging as chemically analysizing car paint and using statistics to determine one’s sex from their bones.

Ryan Haller, junior chemistry major, gave a bit of insight into putting together his project and how to use in the future.

“We would collect paint chips from damaged vehicles and we would get a laser and skin off the top to get a cross section so we could get all the layers,” Haller said. “Then you would lay the paint chip flat and scrape the razor across the top of each individual layer. We would then roll those flat and analyze that…In theory, it should show that individual layers [of paint] get the same information as cross sections.”

According to Haller, if a hit-and-run incident occurred, layers of paint could be used just as effectively as a cross section to narrow down what type of car was responsible.

“I saw an episode of the Forensic Files where there was a case with a little girl that was solved with a fiber from a car,” Hays said. “I went up to professor [Holly O’Neill] and wanted to do a fiber project. We went out to different dealerships here in Topeka. We ended up collecting samples from five different makes…What we did was we mounted fibers with a mounting medium. We would find nylon, go to the flow chart. We got three consistent fibers.”

Like Hays, Mackenzie Walls, forensic anthropology major, conducted her research with a new sort of database in mind. Her research, consisting mostly of statistics, is about trying to ensure that the points on the human skull and pelvis accurately, consistantly determine an individual’s sex.

“This is just a small part of the overall grant that Dr. Klales is doing,” Walls said. “I did the stats to see if everything was acceptable, reliable and accurate. The point of this grant was to take all the data collected, put it in a database so it runs the points.”

Pardon Masarirambi, Emporia State graduate, was the outlier in terms of school and goal in mind for his research. His project focused on using flesh-eating insects as a second source of DNA in the even that their either was not a body available to examine or if any remains were unidentifiable through other methods.

“If someone is missing and we don’t have a body, what do we use?” Masarirambi said. “I thought about flies, but flies can go anywhere, so I need something else. That was my starting point.”

Whether it was presenting research, giving job advice to students, or comparing KBI’s operations to their TV counterparts, Washburn’s Forensic Science Department put everything they had on the table for the Career Fair for the conclusion of forensic science week.