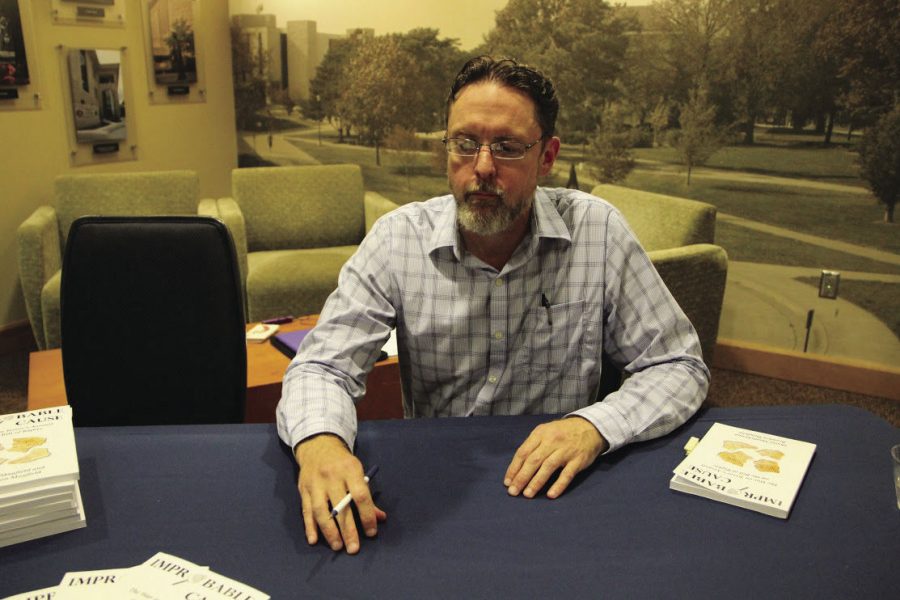 After his presentation, Mayfield had the opportunity to sell copies of his book, for which a portion of the sale would go to the Oregon Innocent Project.

Washburn students had the opportunity to listen to Brandon Mayfield give a presentation Sept. 18 in the Memorial Union.

In his presentation, Mayfield gave the audience some of his background story, as well as discussing the events that occurred in 2004, when he was falsely accused of being the bomber in the Madrid Train Bombing in Spain.

Mayfield has been enlisted in the army twice and after earning his degree from Portland State University, Mayfield then attended Washburn University

School of Law and graduated in 1999. From there, he worked in a small firm in Oregon before eventually opening up his own firm with his wife, Mona, in the Portland West Hills.

“For those of you who haven’t heard of me, I’m the poster boy for what could go wrong in the forensics and criminal investigation arena,” Mayfield said. “I was the victim of one the biggest fingerprint misidentification in recent history.”

While the presentation was in part a narrative, Mayfield focused on three main points: fingerprints, FISA (Foreign Intelligence Surveillance Act), and the Fourth Amendment. He made sure to stress their importance in today’s investigations, as well as his own.

“I personally began to feel suspicious, myself and my family, as if someone were watching me, or keeping tabs on my family,” said Mayfield, referring to evidence his family found someone had been going through their house and law firm.

Mayfield was arrested as a material witness on May 6, 2004. After being held in prison for 14 days, Mayfield was released as Ouhnane Daoud’s fingerprints were connected to the crime.

Mayfield and his daughter, Sharia, published a book together called “Improbable Cause,” in 2015,  which goes over Mayfield’s case.

Once Mayfield was finished speaking, there was a short time for questions. During the answering of a question, Mayfield even took the time to read a passage out of their book for the audience.

“I think it just proves you have to question everything you know,” Crutchfield said. “Make sure you’re going in when you’re doing your analysis and going in with a blank mind- no biases. Innocent until proven guilty, that’s just been reinforced in my head.”