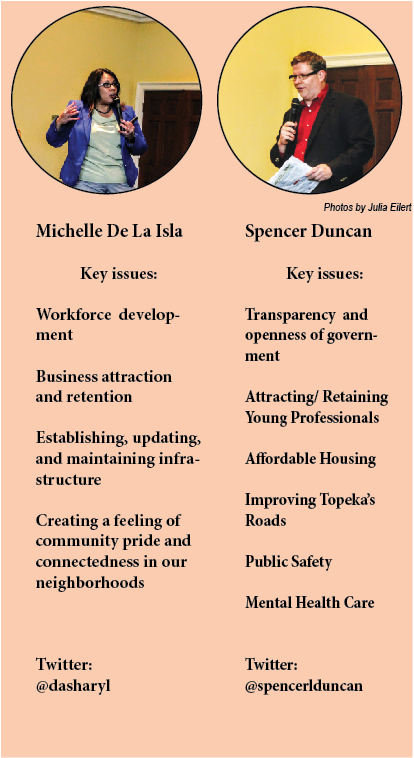 At 4 p.m. Sept. 26, Washburn University hosted a mayoral forum in the Bradbury Thompson Alumni Center. Candidates Michelle De La Isla and Spencer Duncan spoke for students to get to know their policies and personalities.

“I think it did a lot,” said Conner Ertel, freshman history major. “It gave me a lot of insight on getting to know both candidates, as I am new to Topeka, and I really just have not been able to follow this campaign because of that.”

Each candidate talked for 30 minutes, starting out with a little bit of background information. Duncan had the opportunity to speak first.

“I have never run for office before, so I’m a newbie in that respect,” said Duncan, “My first foray into politics has taught me that the world is a fun place. The question is, why am I here before you? I love this city, I really do.”

Duncan was able to briefly touch on his beliefs and what he would like to do in Topeka to improve the community and draw people back in.

“As a Topekan, I looked around and said I can help,” said Duncan, “I legitimately believe I can help. I’m not looking for a career in politics, what I’m looking for is a way to help my community, and this is the opportunity that was in front of me.”

After Duncan’s speech, De La Isla was able to address the audience, giving her backstory and her plans for the future.

“It was in Topeka that I was able to find out who I really was, and it was awesome to come over here,” said De La Isla, “I love the energy we have in the community. When you want to do something cool, people they actually get in touch with you, they get you plugged in.”

De La Isla talked about some of her main concerns, such as public safety and mental health, infrastructure, economic development, and community pride.

“We have a community pride issue, so as mayor, part of my platform is that I want to make sure that you guys are as pumped up about this community as I am,” said De La Isla, “It’s about everyone collaborating together.”

There was an hour set aside for audience members to ask questions after the candidates spoke. Once the questions were finished, De La Isla and Duncan had two minutes to wrap up their messages and thank the audience.

“What I think that’s important at the end of the day is this: if you’re gonna go place a vote, you want to know who the heck you’re voting for,” said Duncan, “I hope that’s what this has done.”

De La Isla was the last one to speak at the end of the even before the crowd dispersed to the outside booths.

“I think it’s wonderful that you guys are all engaged,” said De La Isla, “So whether you are supporting me or supporting Spencer, please go out and vote. Do me a favor and encourage people to do the same.”

WSGA provided snacks and beverages for the event. WU Vote and the Shawnee League of Women Voters were present outside of the room to help students register to vote before and after the event.

“This was really a good avenue in which I was able to learn about the candidates, get all the facts and really form my opinion on who I’m gonna vote for this coming November,” said Ertel. “I think having younger people vote is very important, my parents raised me in such a way that I should always vote, and it’s something that’s very important to me. It’s a right that I am going to exercise.”