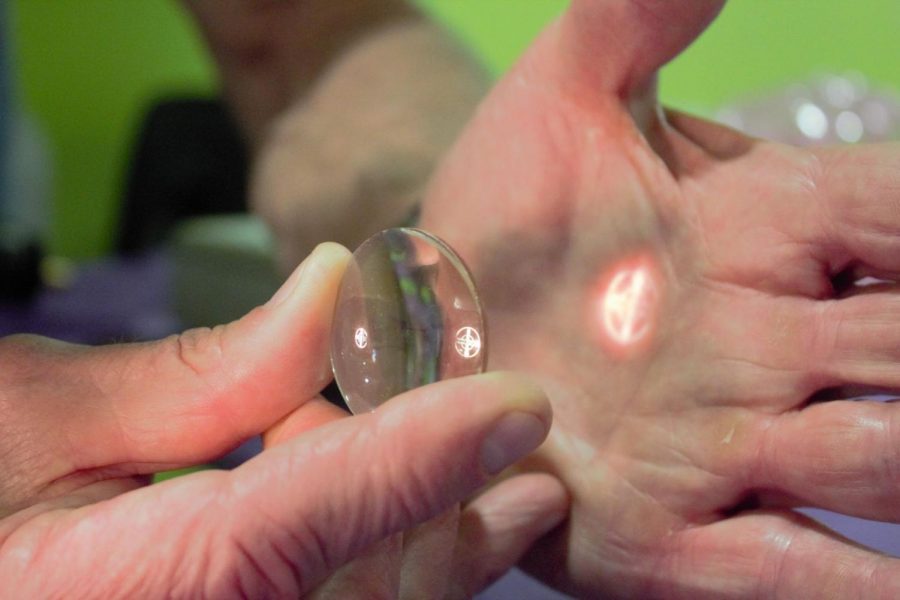 Let there be light: Dr Chris Orensen demonstrates how light can be manipulated by lenses.

The ice cream stall at the Ad Astra Kansas Space Celebration was the chillest place to be this weekend.

Their stall was one of fifteen at the event, which aimed to promote STEM programs in Kansas by focusing on space sciences.

Janette Steinert, head organizer of the event, said the event was focused on getting children inspired in scientific fields.

“We used space science as a medium because it makes use of all facets of science: chemistry, physics, engineering etc,” Steinert said. “We want kids to be interested in science.”

Sarah Lamm’s presentation, “Red Planet, Red Planet: Let Curiosity Scan It,” exemplified the event’s goal. Lamm showcased the various Girl Scouts who had taken an early interest in the sciences and had grown up to become astronauts. She also talked about what ignited her own interest in astronomy, and how being born in rural Kansas allowed her to view starry skies unobscured by light pollution.

“Space Weather,” the other presentation of the night, demonstrated the extreme weather conditions in space and explained how they affect earth.

Apart from the presentations, the stalls, too, attracted children with live experiments and demos. Greg Inkmann, representing the Foundation for Aeronautical Education, hosted a free radio-controlled trial flight at his stall. He said that the presentation gave children the scientific know-how to begin learning how to fly a real plane.

A food science stall set up by Kansas State University’s food science institute sampled out astronaut food to event attendees. The foods were made my mixing dehydrated food powders and water in plastic bags.

The stalls weren’t the only attractions, though, as crowds gathered to view the various gemstones, geodes and fossils on display.

The event ended with a viewing at Washburn’s Crane Observatory. While rain made it difficult to view stars through the university’s telescope, attendees were still impressed by the tour of the observatory.

According to Steinert, this year’s event was a bigger success than anticipated.

It was a proud day for both the Washburn community and STEM programs.