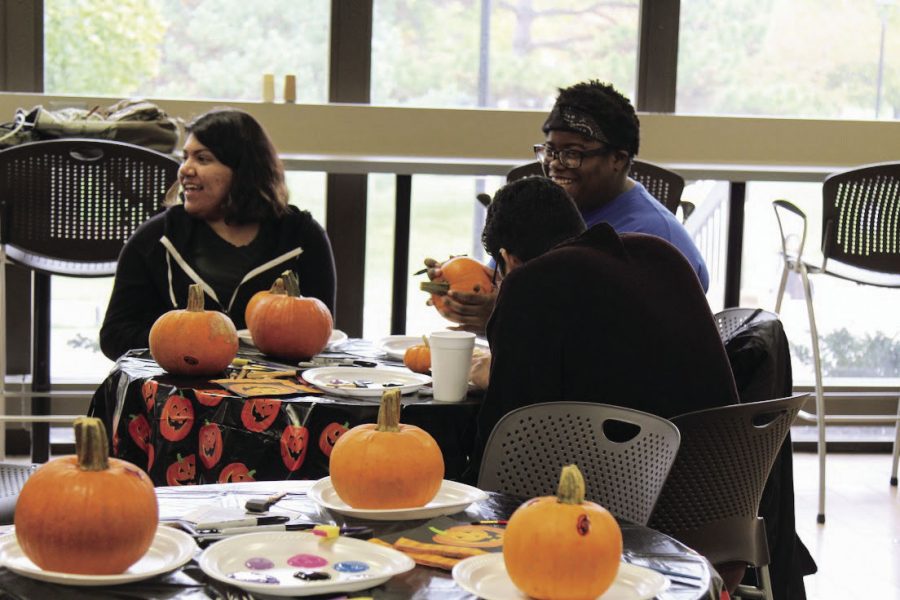 Sitting together: Students paint and talk during CAB’s DIY series. The first day was painting pumpkins, the second day was string art and the third day will be making hot chocolate jars.

Ichabods get crafty this week.

In response to midterm season and the impending fall break, CAB hosted a set of three free DIY workshops Oct. 23 through Oct. 25 around campus.

Courtney Greeve, sophomore and point director of the project, said the events were planned with stress-relief in mind.

“We just decided it would be a good stress-reliever for people since finals are coming up in a couple months, and midterms are coming up,” Greeve said.

The first DIY workshop was held in Mabee Library, where students could paint and decorate pumpkins to get into the Halloween spirit.

The event drew in dozens of students looking for a place to relax and have fun.

“It doesn’t take a lot of brainpower to paint a pumpkin,” said Alleander Adee, junior psychology major. “It’s nice to sort of get away from everything and just have that quiet space where you can just talk and paint.”

Students were provided with paint and pumpkins and were allowed to take plain pumpkins to carve later at home if they didn’t wish to paint them.

For the second installment of the series, students were able to make string art in the Union Underground. They were given string to create unique designs on pre-cut pieces of wood, then a hammer and nails to fix the designs into place.

Some of the students at the event had gone to the previous day’s DIY workshop and said they intended to attend all three to make it through the week.

“It’s nice that it’s a free activity to do in the middle of the day when you are between classes,” said Aubrey Keirns, senior nursing major. “I’m very excited about the series because I’ll have a lot of fun just relaxing during midterm time.”

Mikayla Shields, sophomore business major, said that the creative break in the day helped her de-stress between classes.

“I’m enjoying it because I just got out of class and my brain was kind of funky, but now I’m happy,” Shields said. “I think that they’re going to be enjoyable and good, especially for de-stressing and getting relaxed. Even though we’re at a university, we can still have fun and relax with our classes.”

Gema Rodriguez, freshman undeclared major, said free events like these show her that her university cares about the student body’s well being.

“It’s also just a really good way to show that the school cares about us during midterms,” Rodriguez said.

The last DIY will occur Oct. 25 in the Union Underground. The activity of the day will be making hot chocolate jars to keep Ichabods warm and happy over fall break.