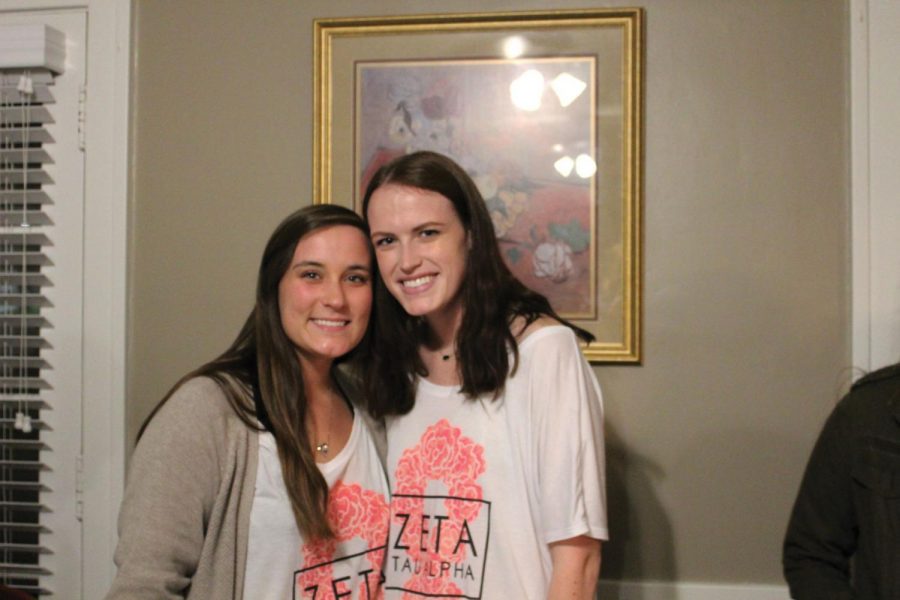 Scoop it out:  Zeta members Ashley Smith and President Stephanie Jones serve up frozen custard during the Sundaes on Monday fundraising event.

October is breast cancer awareness month, and Washburn’s Zeta Tau Alpha sorority is calling attention of the cause to benefit Think Pink Week, as it hosts events on campus throughout the week of Oct. 23.

During Think Pink Week, the sorority promotes breast cancer education and awareness by handing out the familiar pink ribbons, hosting events at the Zeta house and aiding local and national efforts to support breast cancer awareness and fundraising efforts.

“Of course you’ve seen how the NFL wears pink throughout the month,” said Taryn Wilkins, senior mass media major and Zeta member. “On a national level, chapters will go and hand out the pink ribbons beforehand for people to wear during those games.”

Wilkins said that over 19 million ribbons have been handed out nationally. Students can stop by the Zeta table in the Memorial Union this week and pick up one to wear and show support for the cause.

Zeta has three main fundraising events planned throughout the week this year. Oct. 23, Zeta hosted Sundaes on Monday, where the Topeka community could visit their house and donate $3 for sundaes provided by Freddy’s Frozen Custard.

Kappa Sigma, too, is hosting an event for their philanthropy, the Military Heroes Campaign, 5 p.m. to 11:30 p.m. Oct. 25 at The Blue Moose. If you mention the organization, 25 percent of the proceeds from your bill for the night will go towards the cause.

Zeta has shown full support of Kappa Sigma’s event, even when they discovered it was in a calendar conflict with their own week of philanthropy.

“I believe Zeta originally had an event scheduled for the same night and were gracious enough to move it for us,” Surritt said.

Zeta has also hosted Nacho Tuesday so far this week, which took place Oct. 24. Attendees paid $5 to enjoy a nacho bar through a partnership with Taco Villa.

Big Man On Campus, the main event of Think Pink Week, will take place at 7 p.m. Oct. 26 at Bradbury Thompson Alumni Center. Big Man On Campus is a pageant-style event where men from across campus compete to raise funds for the ZTA Foundation, Zeta’s national philanthropic arm. The foundation splits its funding to three national partners: the American Cancer Society, which helps with survivor recognition through its Making Strides Against Breast Cancer; the NFL, through its A Crucial Catch cancer awareness campaign in the month of October; and Bright Pink, which hosts workshops to educate women about breast cancer.

Wilkins said that Zeta is putting on Think Pink Week because the issue of breast cancer awareness is an important issue its members need to be mindful of.

“One in eight women will be affected by breast cancer,” Wilkins said. “We have 83 members so statistically speaking, around ten of us will develop it. That makes this a very personal issue for us.”

For more information about Think Pink Week and the ZTA Foundation, or to donate to the cause, visit the sorority’s table in the Union each day throughout the week from 11 a.m. to 1 p.m., or visit zetataualpha.org/foundation/