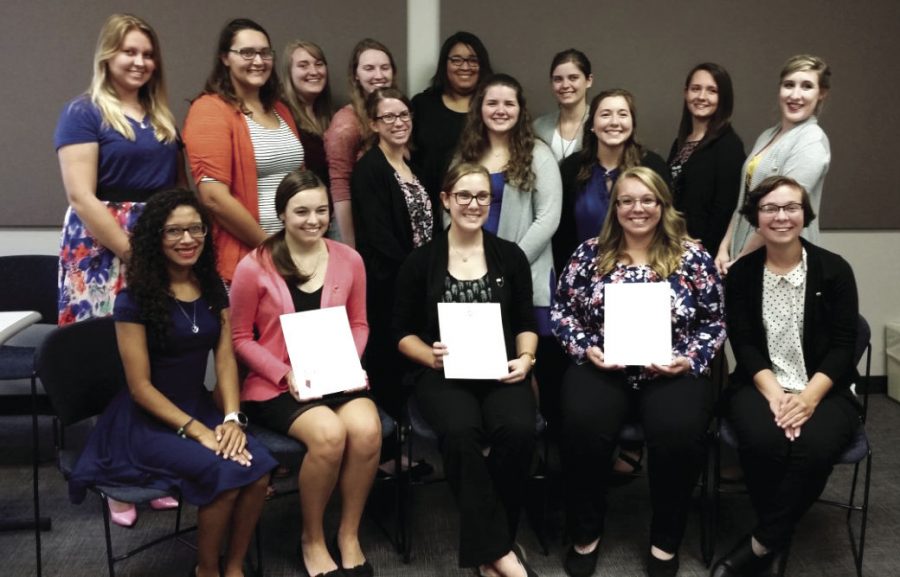 Washburn’s Sigma Alpha Iota chapter has gained national attention for their outstanding philanthropic work and for exemplifying the standards that their fraternity espouses.

According to SAI’s mission statement, the organization’s main goals are encouraging, nurturing and supporting music in women of all ages, races and nationalities. In light of their numerous regional and state awards in recent years for their performances and work with their community, they have lived up to their mission statement.

As such, recommendation letters, which are necessary in order to win these awards, poured in from regional and state officers for Washburn’s chapter based on its philanthropy and activities that it has both hosted and engaged in.

The province award was a certificate for the Theta A province, where Washburn was chosen among four chapters. The second award, the regional award, recognized them as the top performing chapter in Kansas, Oklahoma and Texas. The aforementioned Katherine Becker award was for the entirety of the United States.

Josey Trimble, senior music education major, said that her fraternity’s Voices of American Women concert played a large role in earning her chapter its many accolades.

“This year, we got the award for the Judy Coder concert Voices of American Women,” Trimble said. “I worked with Jessica Knieff and Anna Glover for a philanthropic concert last year, and that was based around American women, so all of our songs were by American women. It was an empowerment thing since composers all over the world are generally men.”

Despite being a smaller chapter comprised of 16 members, SAI is quite active in the community. According to Trimble, her fraternity hosts Washburn’s annual middle school solo and ensemble festival, and is constantly coming up with new ways to encourage music education in the community.

“So far this year we’ve done a Girl Scout badge workshop to have girls earn different skills,” Trimble said. “We are doing a Relay For Life to raise money for our national philanthropy and we’ll have a booth there to help fund raise our annual middle school solos and ensembles festival. It’s like the high school ones, but it’s more relaxed … it’s to get the experience and perform out in public.”

Along with all of the benefits to the community, merely having membership in SAI adds quality to the college experience, according to Sydney Donaldson, junior music education major.

“I was the kind of girl who thought they would never join a Greek organization,” said Donaldson. “I thought greek girls were all ditzes, then I found out that SAI was a professional fraternity…All of the girls in SAI were so warm and encouraging. I felt all of their love and support.”

SAI has made it easy to get involved with its many activities. Despite being a music fraternity, neither a music major nor minor is required. To gain membership, each person must pass at least one of the music classes available on campus, maintain a certain grade point average and undergo training over the fraternity’s history and goals.

“I feel people around campus don’t know about this opportunity,” Trimble said. “A lot of people take music classes. You can take the Enjoyment of Music class and be considered. It’s a great opportunity to be involved in music in the community. We are always looking for more women. It’s really fulfilling. It’s always good to see a smile on their faces if you like helping out with younger people and love music.”