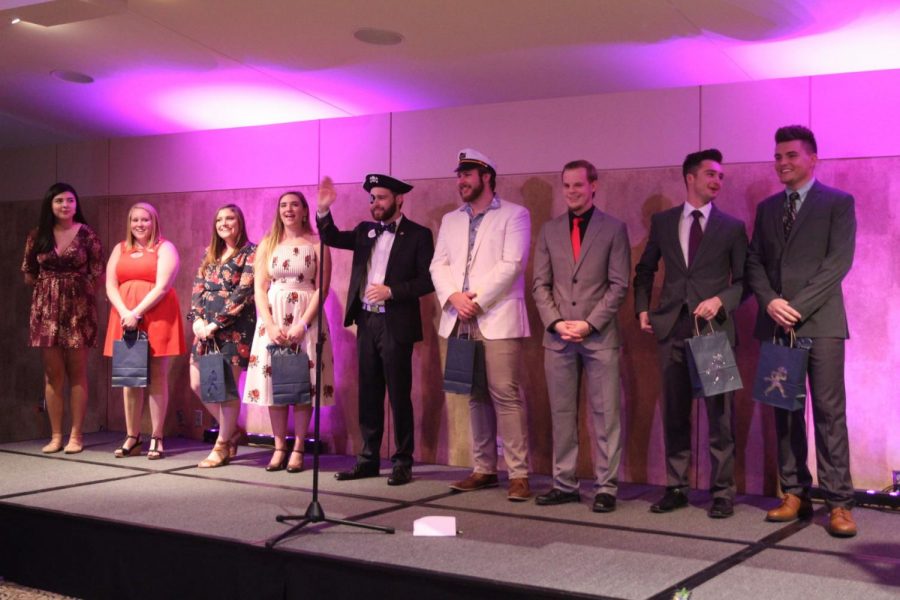 “Tonight, call me captain.” Caleb Soliday, sophomore political science major and chief of staff of the WSGA, said into a microphone to a rowdy crowd of students.

Soliday worked as hype man and organizer for the Homecoming Ball Monday, Oct. 16. He donned a festive captain’s outfit, which fit into the ‘Bods at Sea’ homecoming theme.

“I started with what we had last year, the photo booth, DJ and food,” Soliday said. “It definitely takes some networking to organize an event like this, but it turned out great.”

The ball again featured a photo booth where students could pose for pictures with friends and the Washburn A/B room had been successfully converted into a dance floor. Most students danced under flashing lights.

Jayce Heiman, senior nursing major and member of Delta Gamma, enjoyed the homecoming ball, and said the event was as fun as the previous year.

“It’s recommended that you go by the sorority,” Heiman said. “We’re all about the dancing.”

The homecoming ball is the first of many events during homecoming week.

Announced at the ball were the candidates for homecoming royalty.

Five women and five men were chosen to compete for the crowning. The candidates were selected out of a pool of nominees from different organizations on campus. Nominees were carefully selected by a panel of judges based on a variety of application materials presented. These included written essays, resumes, recommendation forms and interviews with the nominees.

“I felt like I had a good interview, but part of me also didn’t think I gave the answers they wanted,” said Jenny Lieurance, senior communication studies major. “I was nervous going into the interview, but then I realized the panel of judges were all people that I knew.”

Lieurance was announced as a candidate during the ball, and said that initially she wasn’t sure if she fit into the vision of what a homecoming candidate should be.

“If you would have asked me my freshman year if I thought I would be a homecoming candidate, I would’ve said no,” Lieurance said. “My freshman year of college I felt like dropping out, I wasn’t involved in anything, it wasn’t good. As I got more involved, that changed. Now looking back on my last four years, it’s sad that it’s coming to an end.”

Voting for king and queen candidates opened 8:30 p.m. Monday night during the ball. Votes can be placed through student myWashburn accounts. The crowning will take place during the homecoming game Oct. 21 against the University of Central Missouri Mules.