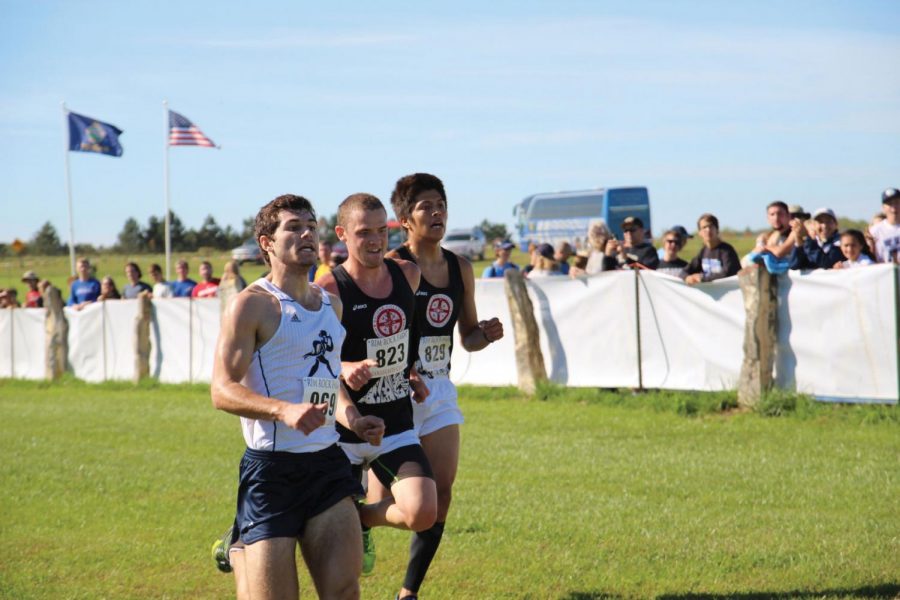 Derek Meeks passes two runners as he sprints through the finish line chute to end his eight kilometer race.

Beyond the paved roads and the manmade terrain, the Washburn Cross Country team faced off with schools like UMKC, KU, and WSU at the Rim Rock Classic in Lawrence, Kansas.

The women’s and men’s teams recalled their lackluster performance the previous week at the Emporia State Invitational and topped it with stellar performances in Lawrence. The men’s team placed fourth as a team, finishing multiple runners in the top 50 like Jacob Klemz, Josh Reed, Chryspus Muema, Tanner Hockenbury, and Derek Meeks.

For Klemz, it was usual to see such an amazing performance from the sophomore.

“I got the job done with the other collegiate athletes today,” Klemz said. “I did not run the time I wanted to run, but overall it is early in the season so I have time to work on it.’

The women’s team also showed a strong performance on the course with freshman Sierra Mortensen finishing in seventh place and the team overall finishing fifth.

With their first six kilometer race under their belt, the women’s team can start to know what to expect when it comes to battling for their conference.

“Conference and regionals are both 6K’s, so it is good to see our times start to compare in the conference,” said Paige Miller, senior.

The teams’ head coach, Cameron Babb, shared his feelings on the teams’ performance and their bounce back from the previous week.

“Today was a great day for us. We looked like we ran well across the board,” Babb said.

With these performances at Rim Rock, the Ichabods are excited to get their feet back on the course and look forward to improving down the stretch.

“Things are starting to come together this year, but it is still early in the season,” Hockenbury said.

Assistant coach Kyle Gibson believes their training and preparation for their ultimate goal for the end of the season is finally looking to pay off.

“We are highest volume this week, so for them to come out and run personal records [it] looks very promising,” Gibson said.

Up next for Washburn is the conference battle in the MIAA Championships in Warrensburg, Missouri Oct. 21. The Ichabods look to reign over the conference and hopefully excel towards nationals.