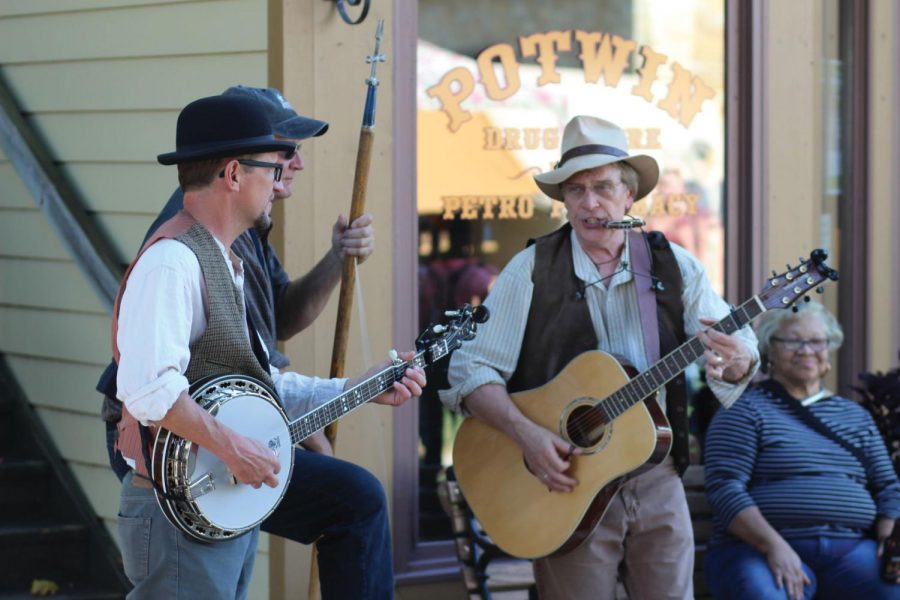 Pickin’ and a grinnin: A group of musicians perform bluegrass music in old time costume. The trio was one of several bands at The Apple Festival that participated in the Wheatstock music concert.

Topeka ushered in the fall season with the 38th annual Apple Festival.

This event was held Sept. 30 through Oct. 1 in Old Prairie Town at the Ward-Meade Historic Site and Botanical Gardens, where the Topeka community gathered to celebrate all things fall.

The Apple Festival is an annual, community-driven event where vendors were selling anything and everything apple related, whether it be caramel apples, hot cider, apples pies and more. Vendors also sold fresh rotisserie chickens, homemade butter, homemade fudge, candles and jewelry.

The festival had a wide variety of attractions, too, such as learning to churn your own butter, taking a handcar ride, listening to the barbershop quartet, touring the historic buildings and playing in the petting zoo. The festival was also a venue for the popular Wheatstock music concert, a collection of bluegrass and country musicians who perform across the state. Rachel Louise Taylor was named as the Wheatstock performer of the year after performing an original song titled “Mud.”

Due to an increase in popularity in recent years, this year’s Apple Festival was the first in its history to last two days rather than just one. Many of the vendors who participate in the festival return each year because of the festival’s increasing popularity and the positive community engagement they experience. Vendors such as Iris Evans and her boyfriend Leon Fundenberger have said that they are eager to attend the event each year.

“This is our second year doing the festival,” Evans said. “It was so much fun last year, so we were excited to do it again.”

All of the proceeds from the ticket and food sales benefit Ward-Meade, as well as help to better fund and expand the Apple Festival each year. For more information on attending or vending at future Apple Festivals, visit the Shawnee County Parks & Recreation website.