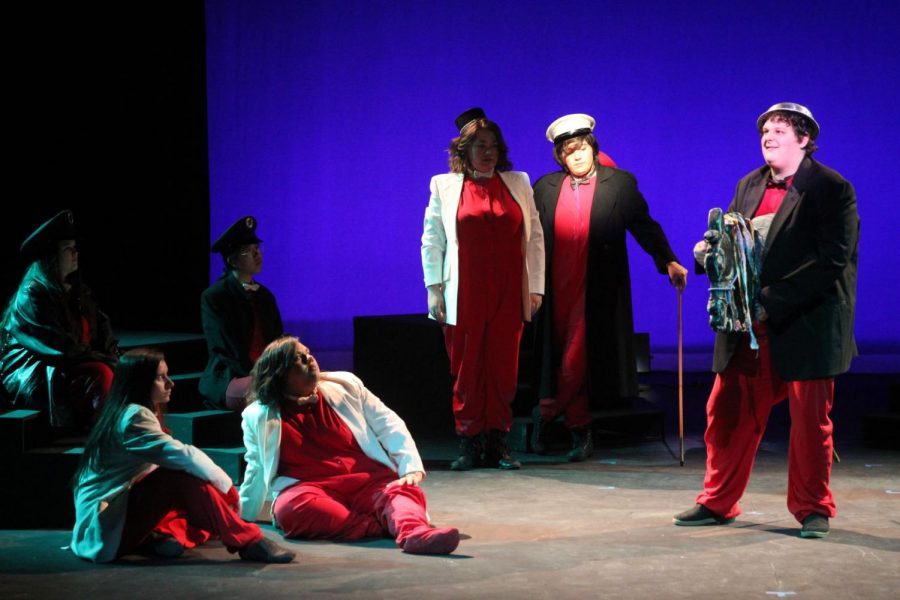 Pa Ubu drags a starved horse from his stables to ride into battle.

Tyrants, Russian invaders and overactive imaginations. No, this isn’t politics, it’s the newest production from the Washburn theatre department.

“The play was initially written by three French boys, teenagers, making fun of their math teacher. We’re taking it back to its roots, and we’re showing this as kids in their pajamas at a sleepover telling a story,” said Tony Naylor, the director.

Emma Staats, the stage manager of the show, described the show as, “good power vs bad power.”

“You have a pig of a human being, taking control by slaughtering a bunch of people. You’ll see how that has a bad impact on society, and how it eventually ruins him,” Staats said.

Staats added that her favorite part of the show is kids as the main characters.

“It’s really just a bunch of kids playing dress-up, and the actors play multiple characters, which is what kids do when they’re playing. It’s really amazing to see these actors rise to the occasion and really just have fun,” Staats said.

Naylor said it relates to the current state of politics. In the universe of Ubu Rex, Pa Ubu is convinced by his wife to kill the king of Poland and usurp the throne. After Ubu imposes heavy taxes to line his own pockets, the young prince of the assassinated king returns with Russian forces to restore him to his rightful place.

“We want to expose students to theater they aren’t going to see anywhere else, and that they haven’t seen before, in the hopes it will pull them back in for future shows,” Naylor said.

Ubu Rex is definitely a show that will draw more than a few laughs, with its bodacious swearing and raucous performance by the enthusiastic performers.