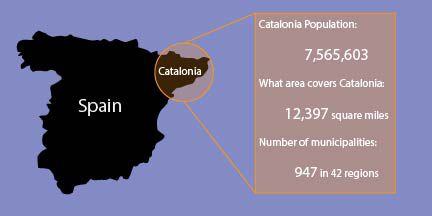 The international community has had its hands full and one of the most pressing issues as of late has been the in-fighting occurring within Spain’s borders.

The topic at the center of it: Catalonian independence.

Catalonia is one of Spain’s 17 autonomous regions, meaning that while it has its own government, economy, culture and language, it ultimately answers to the Spanish government. Catalonia on its own is comprised of around 7.5 million citizens and makes up about 1/5 of Spain’s 1.1 trillion euro economy, not to mention that Barcelona, Spain’s second largest city and a major hub for tourism, is located in Catalonia.

Suffice it to say that the Spanish government has both cultural and monetary reasons to keep Catalonia from striking out on its own.

The question, then, is why Catalonia would seek independence after having been a part of Spain for almost 600 years. It mainly boils down to nationalism on both sides; Catalonia is a very wealthy region that has been negatively impacted by the rest of Spain’s financial crisis from 2008-2013. Catalonia’s local economy has remained stable for decades and even though Spain is out of its financial crisis in theory, it has been on shaky ground at best for more than a decade. By breaking off from Spain, Catalonia would end this financial strain on their economy and likely flourish on its own.

Furthermore, the Spanish government has made moves to heavily suppress Catalan, Catalonia’s native language, as well as Catalan culture and history in Catalonian schools for decades in favor of the Spanish language and culture. Despite Spain having eased up on this suppression in recent years, much of Catalonia still finds erasure of culture, history and language on any scale unacceptable and wishes to break ties with the domineering Spanish government.

In light of the economic strain and overt suppression of their cultural identity, Catalonia has good reason to feel dissatisfied and eager to make a change.

Spain, too, is acting in the interest of its country’s well-being and many Spanish government officials feel that suppressing Catalan culture, history and language in favor of Spain’s would unite and strengthen the country under a single national identity. Its economy, too, is considerably stronger by keeping Catalonia a part of the country. While Catalonian independence would be beneficial to the region, it would leave Spain as a whole more than a little worse for wear in the wake of its current financial rebuilding period.

This conflict came to a head June 9 when Catalonia’s government called for a referendum to determine whether or not it would secede from Spain. The vote occurred Oct. 1 and the votes in favor of independence won in a 91 percent landslide. This vote, though, was anything but decisive.

First, less than 40 percent of all eligible Catalans cast their votes. This was largely due to widespread voter suppression by the Spanish government by way of physical violence against voters. Hundreds of photos and videos have surfaced of Spanish military and police forces severely beating and stomping upon non-violent protesters and voters alike, as well as shooting them with rubber bullets and dragging them out of polling stations by their hair.

Obvious human rights violations and gross abuses of power by government officials aside, the second reason this vote was problematic is because Catalonia did not have the power to hold it in the first place. Spain’s constitution outright forbids a vote such as this without the Spanish government’s explicit approval, meaning that the Catalonian government’s actions were illegal. All things considered, though, Spain’s violent actions could be perceived as overkill in response to a vote that simply could have been ignored and defeated in parliament.

Following the referendum, Spanish Prime Minister Mariano Rajoy suspended Catalonia’s political autonomy Oct. 11 while the issue of independence was addressed. Catalonian Prime Minister Cales Puidgemont called for a meeting with Rojoy and the Spanish parliament to negotiate the return of his region’s political power Oct. 16. When his request was denied, Puidgemont threatened to declare independence without the blessing of the Spanish government Oct. 19, prompting Spain to announce it will be seizing complete control of the region’s government for the foreseeable future.

Rajoy announced that all Catalonian government officials would be forcibly removed from office and that a new election would be called Oct. 21. In response, Catalonia declared its independence Oct. 27. While it’s unlikely that the international community and Spanish government will recognize this independence as legitimate, it was made clear that Catalonia will not accept Spain’s compulsory election for new Catalonian government officials due to occur Dec. 21.

As of now the report is still ongoing and the Catalonian Prime Minister has returned to his country. Events are still unfolding.