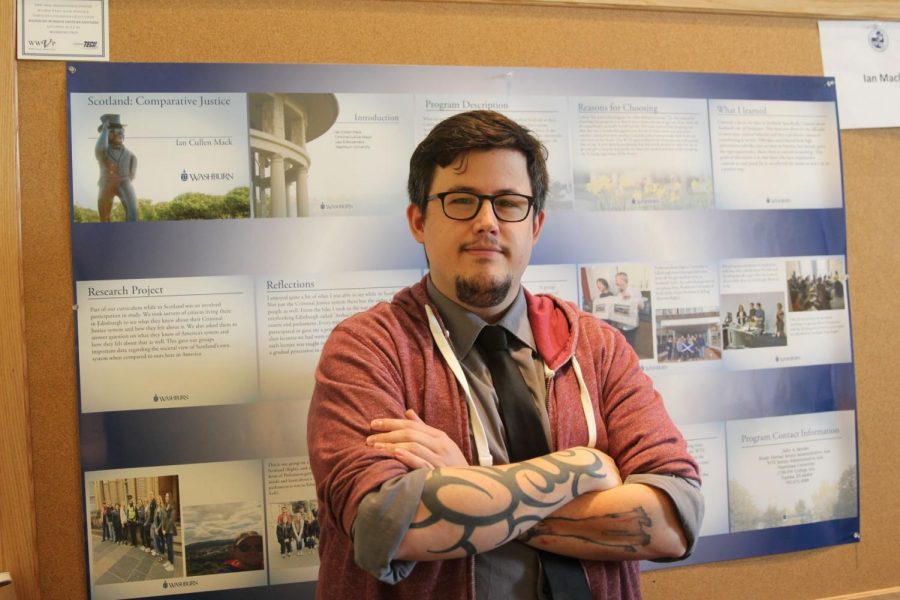 Ian Mack stands in front of his poster on his trip to Scotland. Mack used his WTE trip to explore the differences in the Scottish and American criminal justice systems.

As the fall semester comes to a close, some Washburn students shared their experiences in education taking place outside of the classroom.

Washburn’s Day of Transformation, an event focused on students who took part in the Washburn Transformational Experience, allowed students to present their experiences to the Washburn community with posters Nov. 17 at the Bradbury Thompson Alumni Center.

One group who presented created a unique way to inform incoming students about issues that they might face while at Washburn.

To some, the three women are better known as the Skit Chicks. During the Day of Transformation, the Skit Chicks presented their class project and told the story of how they got involved in the SOC program.

“[We] decided we wanted to change something about orientation, so we decided to do skits,” Cochenour said.

“When we had our orientations, we found ourselves getting bored or not paying attention,” Mayer said. “We knew that was something that we wanted to change for new students.”

The Skit Chicks wanted the students to be entertained, learn the rules and be informed when going into college. Markle said that one key aspect to their performances was using Kahoot, a free app often used in classrooms to poll and quiz large audiences.

While Markle is graduating, Mayer and Cochenour both hope to be SOCs again, but they don’t know if they will organize the skits again. For the time being, though, the Skit Chicks said that they are proud of what they have accomplished and hoped they made freshman orientation more enjoyable.

Another student presented her journey to a place that is very much a part of her own story.

When senior Charla Jefferson told people that she was going to Korea to study abroad, the first question many asked was “which one?”

Part of the reason for her Day of Transformation project being about her journey to South Korea was that Jefferson, senior sociology major, wanted to educate people on the culture but also unravel her own self and discover something called han, a Korean word meaning a tangle of feelings, like regret and sorrow.

“[The term] really resonated with me,” said Jefferson, who is half Korean. “For my childhood, I didn’t have much Korean culture growing up.”

To discover a missing piece of her puzzle, Jefferson traveled to Hallym Chi University in Chuncheon, South Korea. It was important to show, in her project, a South Korea different from the TV version, where everything is locked up and backwards.

Jefferson said one of the biggest things that surprised her was how similar the students were to American students, the struggles of “school, boys, work, stuff like that,” were many of the same troubles we go through. Charla spoke about how the people in Korea were welcoming, eating was a social event and how she practically climbed mountains to get to school each day.

At the end, Charla said that the trip led to a lot of self-evaluation, especially when she got home, and that she started to think about these questions.

Jefferson doesn’t think her journey with her own han is over, and plans on going back to South Korea to continue to discover herself.

One senior talked about his trip to Scotland and one major difference between our two countries.

Criminal justice reform has been a long-debated topic throughout the world and the U.S. Senior criminal justice major Ian Mack set out in his Day of Transformation project to study the differences that a new total reform has brought to Scotland versus the current system in America.

Mack said that Scotland is “leaps and bounds” ahead of any other country.

“When an offender goes into the system, it isn’t their end all be all,” Macksaid.

Instead, offenders can still be accepted for jobs, such as doctors and some can even become police officers. The program is focused on reform, often not even calling offenders inmates, or cataloging them by an ID system, according to Mack.

In Scotland, guards and inmates alike are called by name and cells can be decorated with posters and such in however they would like. This system is a massive difference from American prisons which are locked down, with many inmates in cells with bare walls.

“The point was to make sure that they were apart from society, but they’re not cut off,” Mack said. “That’s what makes it different from our system in America.”

Mack felt that American prisoners are often treated less than human. Mack studied the comparison first hand with a trip to Scotland for two weeks and said that the new system, which also focuses on consolidating police headquarters, has been proven to work.

“I think the numbers are around 23 to 30 percent drop in the last few years,” Mack said.

While this has been a system proven to work in Scotland, Mack estimates that it will be years before the US is able to transition to such a program. There are so many steps, that it will take a total overhaul in the way the American system treats its prisoners. Still Mack is hopeful and ultimately thinks that the Scottish program, has potential, and will continue to succeed.