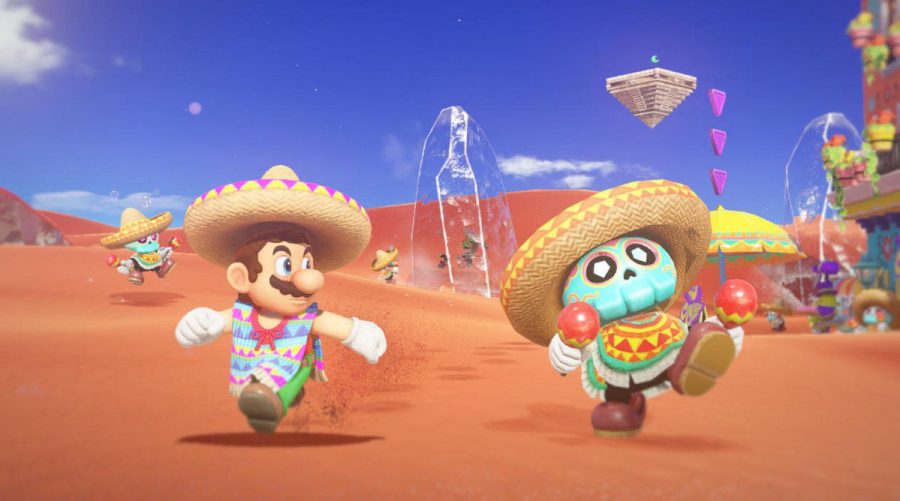 Dressed to impress: Every beautiful environment of "Super Mario Odyssey" comes with a huge amount of hidden purple location coins which can be used to buy region specific items including costumes for Mario to wear. Tostarena, in the Sand Kingdom, has two outfits to purchase with regional coins: a poncho and sombrero, and a cowboy hat and outfit.

Only a few characters have the distinction of being so recognizable they’re practically pop culture royalty.

Mario is one of those characters, and the newest entry in his series is proof of his celebrity status and why there’s nothing quite like a Mario game.

Bowser has once again kidnapped Princess Peach and this time he plans to marry her. After Bowser destroys Mario’s hat, he knocks him off an airship and Mario lands in Bonneton, a city in the Cap Kingdom. There he joins forces with a citizen of the mysterious land named Cappy, a small ghost resembling a top hat whose sister has been kidnapped by Bowser for the wedding.

Together Cappy and Mario must travel to more foreign lands and use Cappy’s abilities to help Mario capture and inhabit the bodies of creatures and earn their special skills. They travel through sun-scorched deserts, bustling metropolises and lava surrounded archipelagos to stop Bowser and his path of chaos and destruction.

“Super Mario Odyssey” looks incredible. Every hair on Mario’s mustache, every frame of a backflip and every beautifully rendered environment of the multiple kingdoms in the game are so meticulously crafted to look beautiful on a large tv screen or on the smaller handheld Switch itself.

Mario’s new capture ability is also a refreshing addition to the game. Mario has a huge amount of movement in the game already, but adding Cappy to the mix allows him to do dozens of other complex movements that make the tiny plumber look like the greatest acrobat of all time.

Cappy can capture over 50 different enemies and objects in the game including classics like Chain Chomps, Goombas, Cheep Cheeps and Bullet Bills, as well as a huge slew of never before seen enemies which mix up the gameplay in every new kingdom you travel to.

The environments, in particular, are a crown jewel of the game. Some are less inspired like the Snow and Lake Kingdom, which feel pretty much like standard styles of Mario levels, but these are still filled with so many unique enemies, challenges and moments that they are still incredibly enjoyable.

Without a doubt, the best locale is New Donk City in the Metro Kingdom. A skyscraper-laden concrete jungle filled with the most unique and uplifting moments the game has to offer before a huge crescendo into a musical number that celebrates the amazing legacy and journey Mario has had over the years.

“Super Mario Odyssey” is one of the best Mario games of all time. It is equal parts celebratory of Mario’s legacy and of his need to grow and change. This in a way feels like Nintendo commenting on itself. Its flagship character embraces new and innovative ideas while also acknowledging what its fans loved from its past. With incredible visuals, a fun story, a great new addition to the cast with Cappy and fantastic new mechanic locations, this makes for a truly incredible game that is not only worth your money, but fully sells why the Switch is an incredible piece of hardware.