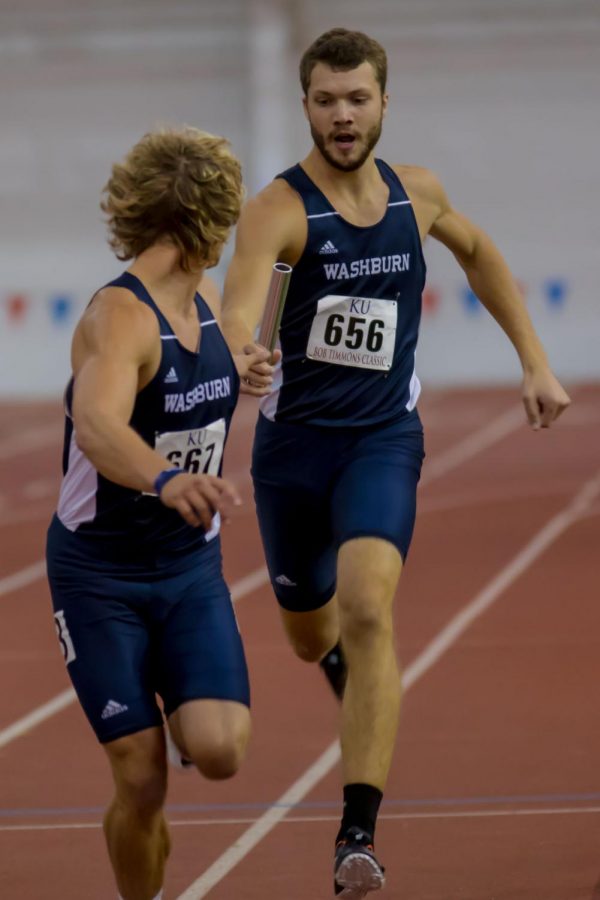 Washburn’s track and field teams had a satisfying start to their indoor season Dec. 2 at the Bob Timmons Challenge. The event was hosted by the University of Kansas at the Anschutz Sports Pavilion.

The Ichabods placed well in almost every event they participated in, the most memorable being Martana Stemmons, sophomore, and her 15.99m weight throw. Stemmons set a new school record, surpassing the previous distance of 14.60m and ranking second at the competition. Michael Majors, sophomore, also placed second in the men’s weight throw.

Several pole vaulters on the women’s track and field team ranked highly for the Ichabods, too. Their performance placed them high on the conference list, making for an excellent start to their season. Jack Nobel, sophomore, landed fourth place in the pole vaults on the men’s team.

Cameron Babb, head coach of both the men and women’s teams, expects to see more from this new runner.

“[Weins will be] exciting to watch when he goes into the multi-events,” Babb said.

Washburn’s track and field program is only in its second year, but the athletes aren’t letting that stop them from improving and ranking high against seasoned opposing teams.

“Everybody performed well,” said Dallas Thompson, junior thrower. “It was a lot of kids’ first actual track meet. We were new last year. We have some [teammates returning] but there’s a lot of young kids still, so I think the highlight was getting the young kids in their first competition.”

Thompson participated in track and field at Hutchinson Community College before transferring to Washburn.

“I’m one of the older ones, so I feel like I have to bring confidence,” Thompson said. “Specifically, when we go to meets, a lot of the kids are like, ‘Oh this is like a new thing.’ Since I’ve already been to three years worth of meets, I feel like if I bring that it makes them feel more comfortable on meet day.”

Coach Babb agreed that the team’s biggest challenge this season will be their young standing.

“The kids that have been here for a year understand what they’re doing now,” Babb said. “We’re bringing in a pretty decent recruiting class and training a little bit smarter throughout the fall. It just seemed to fit better this year.”

Overall, the teams fared well against the competition and are looking to continue to improve.

“We’re really excited about this season,” Babb said. “I think we’re a lot more prepared going in than [we were last year.]”