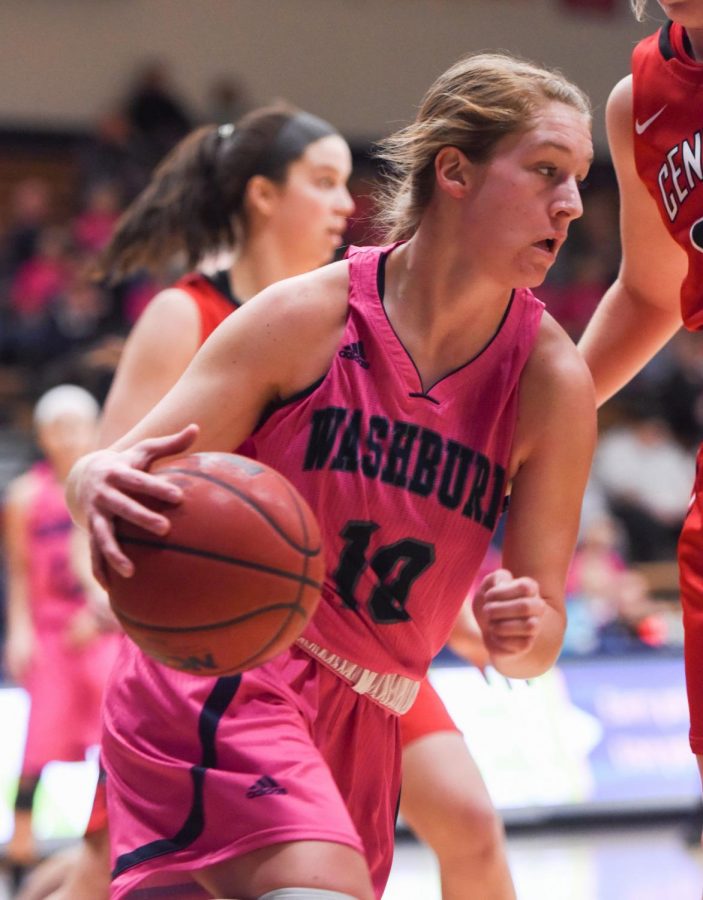 Washburn guard Macey Langvardt rebounds the ball for the Ichabods against Central Missouri on Saturday, Jan. 27 at Lee Arena.

Women’s basketball faced Southwest Baptist Jan. 24 and it was a close game from the start.

The Ichabods outscored the Jennies 18-17 in the first quarter but ended up trailing by six with 2:23 left in the half. Sophomore Reagan Phelan was on fire behind the arc, she even had a three-pointer at the buzzer.

The Ichabods defense was strong as it held Southwest Baptist players 0 for 6 from the field and 4 for 17 for the entire half, which was the worst of the night.

The team took its first lead of the second half as junior Taylor Blue, senior Axelle Bernard and Reagan Phelan each put up two points for a 6-0 run, putting Washburn up 63- 59.

The Bearcats started to rally in the fourth quarter, tying the game at 67 and pushing the game into overtime.

In the opening of overtime, Phelan and Alexis McAfee put down back-to-back buckets to give the Ichabods a 71-67 lead. The final score was 77-72 as Washburn won a thriller at home against the Bearcats.

The women’s team was going head-to-head with the No. 1 team in its conference Jan. 27, Central Missouri, which is ranked seventh in the nation and first in conference play with a record of 17-1, and 11-0 in MIAA.

Washburn struggled in the first half, only scoring eight unanswered points with Central Missouri scoring 22.

“We just have [to have a] better second quarter because they scored 22 points and we only scored eight.” Phelan said.

The second half is when the Ichabods started to make a run as they outscored the Jennies 22-19 in the third quarter and 15-14 in the fourth, but it wasn’t enough to beat Central Missouri.

The Ichabods could not pull off the upset as they lost 63-72.

Phelan finished the game with 19 points, four assists and two steals, while Bernard finished with her third consecutive double-double with 13 points and 14 rebounds and McAfee with 17 points.

Up next the Ichabods play at 5:30 pm., Feb. 2 at the University of Nebraska at Kearney.