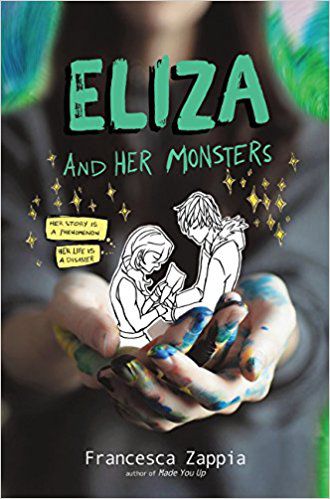 Without any definitive bestseller to start an flood of knock-offs and copycats a la “The Hunger Games” or “Twilight”, the books that dominated the Young Adult  bestsellers list in 2017 had an appealing variety missing from previous years.

1. “Eliza and Her Monsters” by Francesca Zappia

Going off the simple premise of a high school senior who secretly creates content for a massive online phenomenon, Zappia explores new ideas such as how instant online feedback can affect artists, as well as looking at the responsibility of content creators and whether they have a duty to finish what they start. With a mashup of art, screenshots of forum conversations and fanfiction, “Eliza and Her Monsters” could have gotten by with with the gimmick-y aspects of the novel and been praised as a fantastically original novel. Yet, Zappia decided to go the extra mile and write a great book that pulled double duty by not only forming a fantastical world that the main character loves, but an insightful contemporary story that explores depression and friendship as well.

Set in the world of the Seven Realm established by a previous quartet, Shadowcaster focuses in on Alyssa ana’ Raisa as she leads a group of soldiers across a treacherous kingdom to try to end the war that claimed her sister’s life. The characters are immensely likable, the action scenes are well done, the politics are interesting, and the plot doesn’t allow anyone to win too much. Best of all, Alyssa is a completely natural female action hero that doesn’t feel forced, and whose abilities completely make sense with the backstory given.

3. “Strange the Dreamer” by Laini Taylor

Gorgeous writing and a lovable narrator who loves books almost more than the reader ensures that the reader will stick with “Strange the Dreamer” as it builds a world strangely reminiscent of 1001 Arabian Nights, with feathered monsters, blue children fathered by the gods and moths that interfere with dreams. The characters are fully realized and the plot is both surprising and well-paced as it follows Lazlo Strange and his companions as they quest for a missing city, alchemy and the mystery of the blue girl in his dreams.

The third installment to Sanderson’s high fantasy saga, “The Stormlight Archive”, “Oathbringer” gets the heavy task of setting up enough storylines to carry what is promised to be a ten-book series with books that all easily clear 600 pages, along with continuing development of the three leads. The book does this with finesse, and doesn’t waste any time on needless sideplots or filler. It’s hard to keep momentum going with such a long series, but Sanderson somehow finds a way to keep the plot from ever becoming stagnant.

5.  “All the Crooked Saints” by Maggie Stiefvater

Would you confront your own darkness for a miracle? The pilgrims of Bicho Raro, a town in rural Colorado come from far and wide to meet the Soria family, a group of saints who have the ability to conjure up a physical manifestation of your problems that you have to work through in order to receive a miracle. The prose is artful and the dilemmas facing the Soria family are both illuminating and sad as the book explores the different facets of the guilt we rack up just by living and how different people push through it. Steifvater is a master of atmosphere, and manages to create a town that easily accommodates a plot that leans into horror, literary fiction, magical realism and comedy seamlessly.

6.  “Turtles All the Way Down” by John Green

Best known for his monster hit, “The Fault in Our Stars”, Green returns with a mystery novel that follows Aza Holmes, a teenage detective struggling to solve the mystery of a missing billionaire while juggling her mental illness. Green made an excellent writing choice by not making the mental illness the main plot, but by working it into the novel as something that never quite goes away and slithers in when least convenient. His protagonists, sharp and quirky as always, are more realistic than his leads from some of his past works, and seem less beholden to flights of fancy than previous works.

7. “Generation One” by Pittacus Lore

The first in the sequel series to the superhero series, “I am Number Four”, “Generation One” expands on the superheroes-on-the-run-eque premise that started with the parent series. Following the group of humans that gained alien powers in “United as One”, the book has just enough superhero tropes to keep nerds happy, such as the training academy that definitely wasn’t ripped straight from X-Men while creating stories to benefit old characters we recognize as well as the newbies. While not revolutionary by any means, the book is packed with super powers, secrets and just enough action sequences to make fans happy.

8. “The Book Jumper” by Mechthild Glaser

Translated to English from its original German text, “The Book Jumper” feeds into every book lover’s dream- the main character finds she is descended from a noble Scottish family who has the ability to jump into the plots of books. Instead of trying to be a typical YA fantasy with cutting remarks and a healthy disregard for characters who actually seem to know what they are doing, “The Book Jumper” is altogether cheesy, schmaltzy and shamelessly fairy-tale-esque. It doesn’t try to reinvent the wheel, it simply goes for the soft spot in every reader’s heart as it gives life to the feeling one has as they dive into a good book.

Victorian England meets ghostbusters in the sequel to “The Dark Days Club” as Lady Helen feels the fallout from the disaster that was her coming out ball. The plot, set in a proper English town, with old-timey gadgets and nefarious relations, is essentially a typical urban fantasy origin story done with characters that wouldn’t appear out of place in Pride and Prejudice, adding a lighthearted twist to the proceedings. Goodman used the Victorian setting to her full advantage and let it provided struggles specific to the period, such as having Lady Helen’s status as a noblewoman restrict her where she could go to fight her supernatural foes.

10. “A Flight in Time” by Cidney Swanson

An underappreciated author, Swanson plays with the fun idea of a group of friends who use a time machine found at a professor’s house to pick time periods to visit. As far as time travel goes, the mechanics are set in stone fairly early on and while some of the plot commits the crime of insta-love, it is palatable due to the focus being on college majors, family dynamics and the pressure to pick a major that leads to a profitable career. While not an artistic masterpiece, it does what other high-profile YA books that have similar premises fail to- don’t try too hard. Simply focus on only two time periods, tops. Set the rules for time travel and don’t break them. Finally, the obligatory man out of time jokes are way funnier if the characters are established, so it can be character humor more than situational humor. Flight in Time, despite having competition from much more established authors in a recent wave of time-travel romances thanks to “Outlander”, manages to be the year’s best example of how to do it properly.