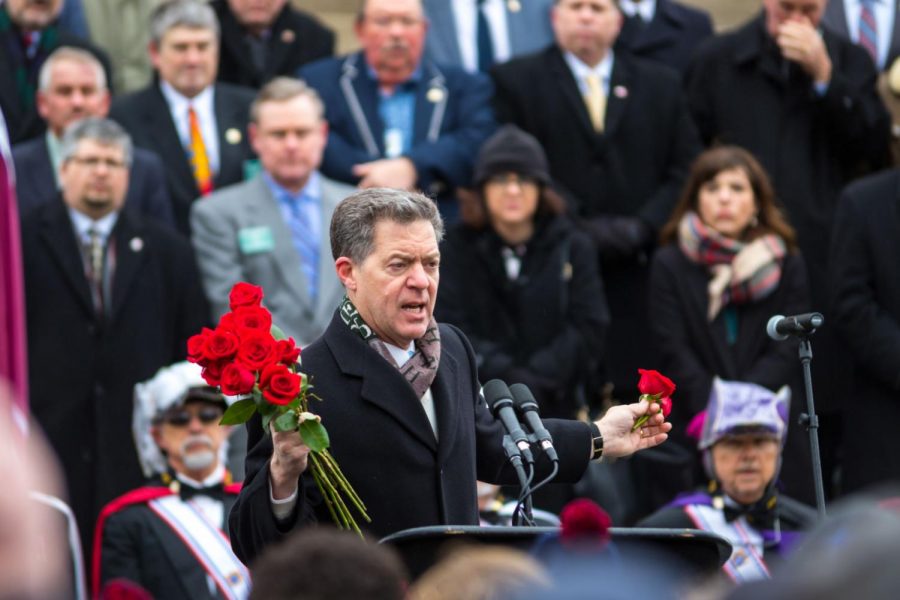 Brownback speaks at the 2018 Kansas Rally for Life on the steps of the Capitol. The rally was one of the final events Brownback attended as governor of Kansas.

“I personally feel blessed by the time I have spent serving our great state and would like to observe a time of prayer and fasting before God takes me on to the next part of my journey,” said Gov. Sam Brownback in a proclamation made Monday. “I invite all Kansans to join me as we pray for our state and our nation.”

Brownback asked Kansans to fast and pray on his last full day in office, which was Tuesday, Jan. 30. He will resign as governor at 3 p.m. Wednesday and Lt. Gov. Jeff Colyer will complete the remaining term. Brownback is stepping into the position of ambassador-at-large for international religious freedom.

President Donald Trump nominated Brownback for the position in July, but he was confirmed last week when Vice President Pence broke the 49-49 tie for confirmation in Congress.

Freshman political science major Bailey Sater said that the confirmation took longer than she thought, since “he was expecting to win easily.” This delay led to “slow going in the statehouse due to a lack of leadership,” said Sater. “He gave the Lt. Gov. many of his duties during the time, but it was still pretty confusing about who was governing Kansas.”

Sater was uncertain about what accounted for the long delay, but mentioned Brownback’s tax plan, which she said, “made him unpopular among both parties,” as well as “concerns about statements he had made in the past regarding refugees and immigration.”

A Republican, Brownback was first elected Governor of Kansas in 2010, and before that served in other political positions including as a U.S. Senator, and Kansas Secretary of Agriculture. Brownback is a licensed attorney, and practiced law in Manhattan, Kansas before his election to the statewide office of agriculture secretary according to The Kansas City Star.

“Brownback’s new appointment is alarming,” said John Williams, senior English major. “The events that have occurred from his beginnings as governor…to his appointment as ambassador-at-large for international freedom have been anything but the support of religious freedom.”

In his new position, Brownback will play an important role in making sure that the people who actually do the foreign policy, from the president down, care about prioritizing religious freedom, writes the Washington Post.

“[Brownback’s] continued support of anti-Semitic groups such as the New Apostolic Reformation is a totalizing factor that his positions are rooted in religio-political stances that seek to reshape societies based on Christian values,” Williams said.

Williams cited things such as Brownback’s support of conversion therapy, and his work to remove LGBTQ+ workers rights and Planned Parenthood from the state and has them, “very worried for the projection of the United States and the effects it’ll have on countries around the world.”