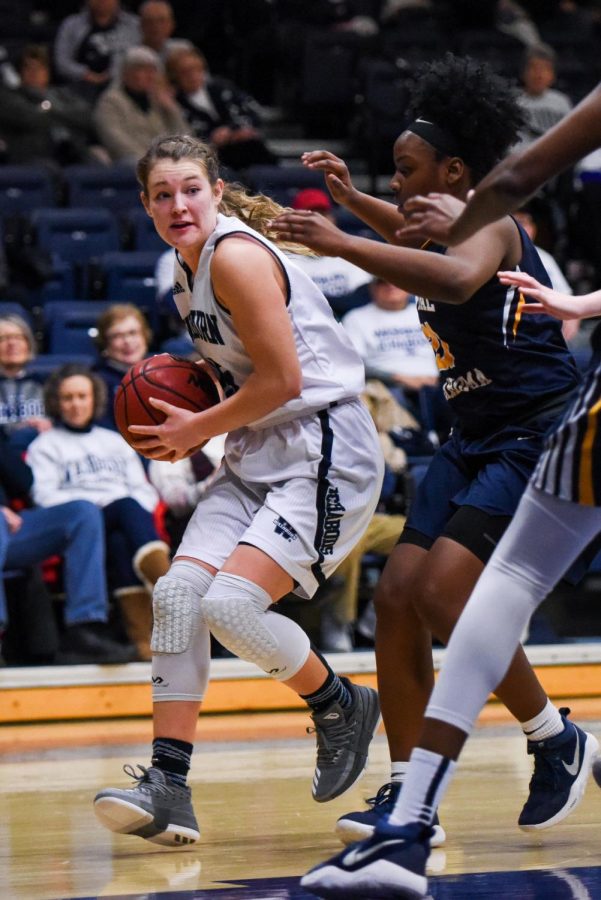 Sophomore guard Alexis McAfee looks for help as she drives in against Central Oklahoma on Saturday, Jan. 13 at Lee Arena.

The Ichabods faced two tough conference matchups at home against Northeastern State University as well as the University of Central Oklahoma.

Coming off their first loss after a six-game winning streak against the Northeastern State Riverhawks (7-6), the Ichabods (12-2) hoped to rekindle the flame that they had up until this point in the season.

Starting the first quarter trailing 14-12, the Ichabods continued to falter into the second half being outscored 23-9 in the second quarter of play.

But they came out of the locker room with a strong defense and better shooting than that put up in the first half.

Even with the Ichabods attempting to mount a late comeback, they fell short losing the game 67-58.

The team continued on and proceeded to prepare for their next opponent, UCO.

Starting the game slow offensively, UCO took advantage and put up five points within the first 10 seconds of play.

The Bronchos took the lead early at the end of the first period, 24-14, with UCO’s Jo’Nah Johnson putting up eight points.

Scoring slowed down the second period as the Washburn defense picked up to hold the opposition to only nine points, but they were plagued by bad passing and frequent steals.

Washburn was able to keep UCO 0-5 from beyond the arc and shooting only 16.7 percent in the second quarter.

After halftime, the Ichabods cut down the Bronchos lead to two within three minutes.

The teams continued to go shot for shot, being tied at 47 at the end of the third quarter.

Washburn’s Mackenzie Loe believed the team’s energy increased in the second half.

“We wanted it more. We got off to a slow start and that’s been our problem lately but if we play like we did second half we will win.” Loe said.

In the final quarter of play, the Ichabods battled for the lead with three lead changes alone in the fourth quarter. This lead to an instance level of play from both teams.

In the final minutes, Washburn’s Reagan Phelan drains a three-point shot to make the game 60-62 with 16 seconds left.

But sadly, with three seconds left, Alexis McAfee missed the contested buzzer beater. Washburn lost 60-62 falling to 12-4 on the season

McAfee believed the game would have been different if they had a better start.

“We need to get off to better starts and not let those little runs in the first and second quarter let us get down so that we have to come back. Really our main problem right now is that was taking a break and letting them get up by 10 and we have to crawl back up,” McAfee said.

Up next for the Ichabods is a road trip to Joplin, Missouri where they will face the Missouri Southern State University Lions, Wednesday, Jan. 17 at 5:30 p.m.