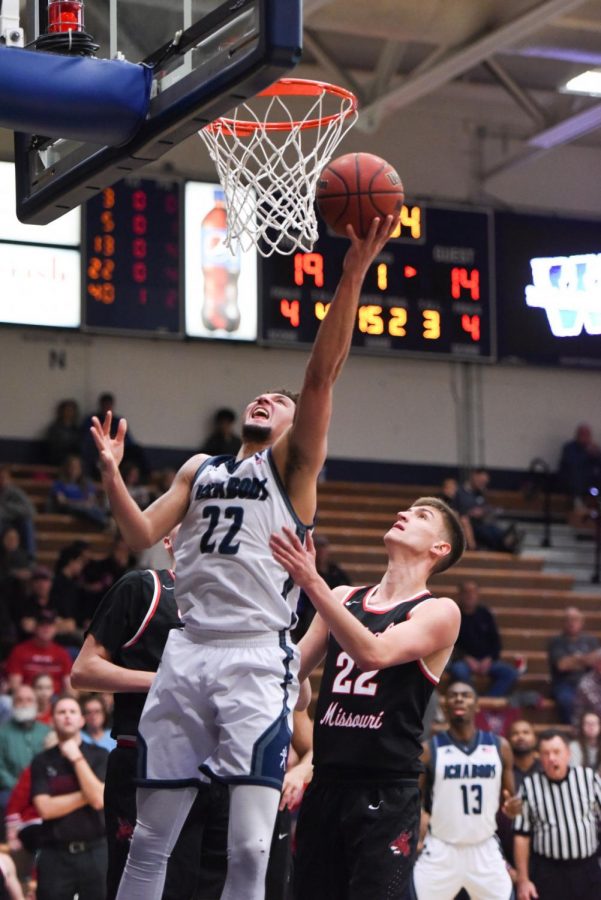 Brady Skeens takes a shot in the paint against Central Missouri on Saturday, Jan. 27 at Lee Arena.

A two-game home stand was in order for the Ichabods last week as they faced the Southwest Baptist Bearcats Jan. 24 and the University of Central Missouri Mules Jan. 27.

After coming off of a broken winning streak against Pittsburg State the previous Saturday, the Ichabods looked to bounce back against the Bearcats in Lee Arena. The game would never be close, as the Ichabods got out to an early start in the first half.

With junior Javion Blake and senior Brady Skeens leading the way with 11 and 10 points, respectively, Washburn kept the margin fairly wide against Southwest Baptist. The first half ended with the Ichabods up by 18 points and they didn’t look back from there.

Washburn continue to widen the lead against the Bearcats in the second half, with Skeens doubling his total points by the end of the game and Blake adding four more along with him as well as junior Tyas Martin putting up nine.

This made a major statement at home after their undefeated conference streak was broken. The game ended with a 29-point Washburn victory as they added onto their impressive conference record of 9-1 in MIAA play.

Washburn then faced the Mules of Central Missouriat Lee Arena. The Ichabods saw another strong first half against the Mules an impressive 13 turnovers during the first half.

The Ichabods played some of the best defense of the season, causing a tremendous amount of frustration for the Mules side of the ball. Washburn ended the first half with another wide gap of 13 points.

Coming into the second half, the bottom fell out for the Ichabods. The Mules started the second half on fire with multiple three-pointers and easy drives to the basket.

Washburn had trouble keeping up as UCM took the lead with around 11 minutes left in the second half. The Mules kept going from there. Even though Washburn ended up keeping this one close, the Mules were too far ahead to be beat.

The Mules won with a score of 63-55, turning Washburn’s impressive conference record into a tie with Northwest Missouri atop the rankings.

“These next two weeks are going to be huge, this is a tough stretch for these guys and these games are very important,” said head coach Brett Ballard.

The Ichabods hope to get back on track before they face Northwest Missouri who is a top contender, setting up the game against the Bearcats as the game of the conference season.