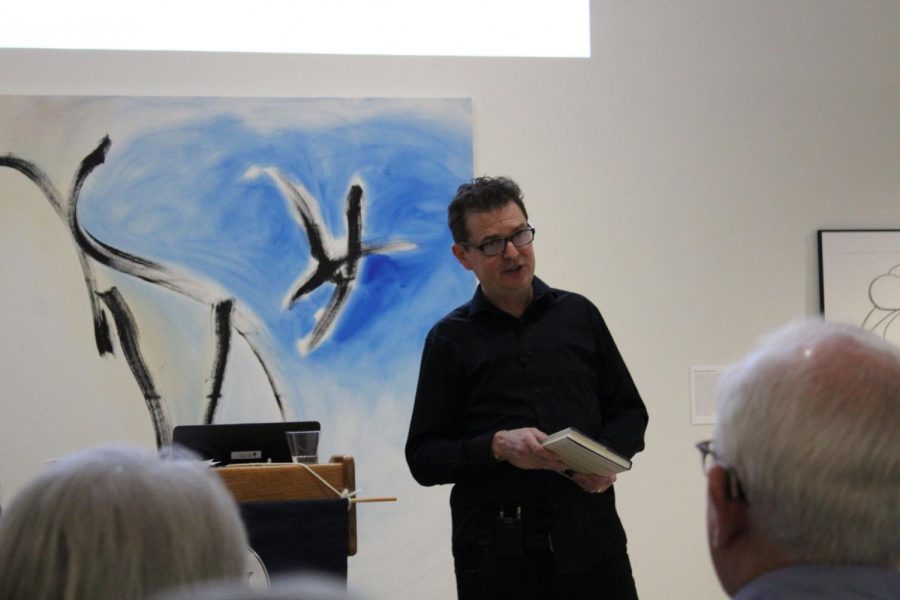 Author of The Last Wild Places of Kansas, George Frazier, explains his passion for preserving Kansas tallgrass prairie. The vast majority of Kansas prairie is privately owned and has been plowed by farmers.

George Frazier, author of “The Last Wild Places of Kansas” and native Kansan, woke up one day and realized he did not know anything about the environment of his home state.

Frazier set out on a journey across Kansas, eager to discover the natural wonders of Kansas that he believed existed. Over the next three years he would plot a map of the most preserved, natural places, and became committed to ensuring that they remain that way.

“When I first started writing my book, people would say to me ‘Oh, you’re writing a book about trespassing,’” Frazier said. “I became very involved with private landowners, who I came to find were the greatest stewards of our wild places because of their connections to them.”

Frazier formed many friendships with private landowners during his travels, who allowed him to explore their land. Frazier tried to avoid writing too much about the great plains of Western Kansas, which are regularly discussed and written about. He tried to focus on wetlands and forests, which are not as commonly talked about in discussions about Kansas ecology.

“We think about Kansas as a prairie state, but in pre-settlement times,15 percent of Eastern Kansas was covered in forest,” Frazier said. “Amazingly, we still have vestiges of that old growth forest around, but most of our forests today are forests that have grown on the graves of old prairie, its relatively new.”

Frazier described ancient Kansas forests as much more biodiverse compared to new growth. The nearest ancient forests to Washburn are between Lawrence and Baldwin, the Baldwin Woods.

“The reason most of the forests exist still are because they are cross timber forests.” Frazier, said.

Cross timber forests are the forests that Frazier mentioned previously- grown on the graves of old prairie. Most of the trees in these forests are stout and the wood is grainy and unusable for timber, which effectively prevents them from being destroyed.

Kansas tallgrass prairie, wetlands and forests are described by Frazier as “Just as bio-diverse as Australia’s Coral Reef” and he hopes they remain this way. Although he has described and plotted out points of Kansas that are notable in his book, he believes there is much of his home state that can only truly be appreciated when a Kansan explores it on their own. The issue today is simply access.

“Today, more than 50 percent of Kansans live in cities, we’ve become an urban people,” Frazier said. “Millennial-aged people are escaping cool, hip locales that have priced them into the ground. They are bringing their taste for the outdoors to Kansas. They quickly discover the matter of access. The issue is that 98 percent of Kansas is privately owned. This makes it difficult.”