The subtleties of ‘Phantom Thread’ are hidden in the linings 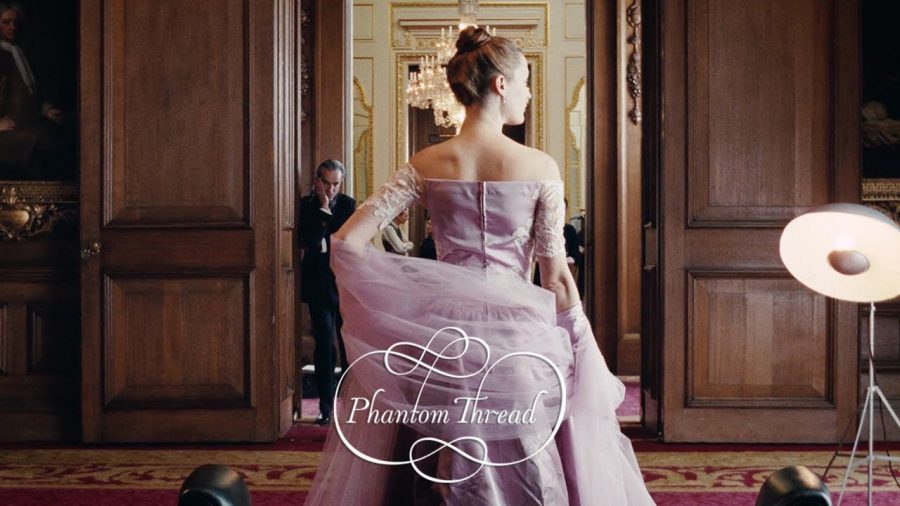 Paul Thomas Anderson teams up with legendary method actor Daniel Day-Lewis for the latter’s alleged last motion picture. What follows is an elegant and delicate film that reveals so much more in its intricacies the more you think about it.

Reynolds Woodcock (Day-Lewis) is one of London’s most beloved couturier, a dressmaker of great renown who, after creating a beautiful new product for one of his clients, absconds to his countryside getaway where he encounters a bashful but charming waitress named Alma (Vicky Krieps). The two of them form a loving relationship very quickly and she becomes his muse and moves her into his house and place of business which he shares with his sister and partner Cyril (Lesley Manville). Woodcock’s obsessive nature with routine and penchant for outbursts and fits of passive aggression slowly create a rift between him Alma as the two fight for control over who gets to have absolute control in their relationship.

The character of Woodcock is another astonishing performance from the always incredible Day-Lewis. What more can be said about Day-Lewis’ raw talent that hasn’t already been said.

He prepped for the role of Woodcock not only by learning the art of couture, but by sewing several elaborate dresses himself. His consistent dedication to his craft is admirable and makes for instantly believable performances that are indistinguishable from his roles previous. Woodcock is a difficult and excessively eccentric designer of garments. At first the movie feels as though it will fall into the category of the “troubled genius” films that often ignore the rude and unnecessary social inadequacies of their protagonists and instead use them to explain how much smarter than an average and social human. “Phantom Thread” never categorizes Woodcock this way though. We are always supposed to feel slightly disturbed by his presence. His specific quirks are less played for unique character traits and more hinting at the insufferability and unchecked social inhibitions of his character and his self-obsession. His life is his work and while it makes for beautiful works of art it does not mean it excuses his behavior.

Krieps is the also incredible in the film. Her ability to walk toe-to-toe with Day-Lewis in their scenes together is a testament to her untapped potential as an actress, and Alma’s love for Woodcock slowly descending into malice and rage at the way he treats her and wishes to control her every movement makes her a worthy foe. Krieps nails her inner turmoil and dissatisfaction almost entirely through subtle facial cues, and when she speaks even her arguments with Woodcock sound like music thanks to the incredibly deft writing of Paul Thomas Anderson.

Anderson, Day-Lewis, Krieps and even Manville carry this movie to a truly beautiful vision that is crammed with dazzling visual depth, incredible acting, a beautiful score and some incredible plotting already make “Phantom Thread” an incredibly well done movie, but there are things lying under the depths that really take the film to a whole different level.

“Phantom Thread” is about the difficulty of relationships and the inherent loneliness that causes us to drive away the people who love us. “Phantom Thread” touches on how when two strong-willed people are paired together, the crashes they cause are inevitable. The movie works almost entirely as a metaphor for this inevitable crash of personality, that often people choose the relationship that may pain them because pain and sadness is the only thing that keeps the grounded.

“Phantom Thread” is about the pains and hardships of love. About how love is never about control or making someone fit to your version of the universe. Love is about letting go. Maybe it’s going to be painful, but in the end you heal. You grow. You lift your curses you have created. You’ll create the phantom thread that sews your lives together.