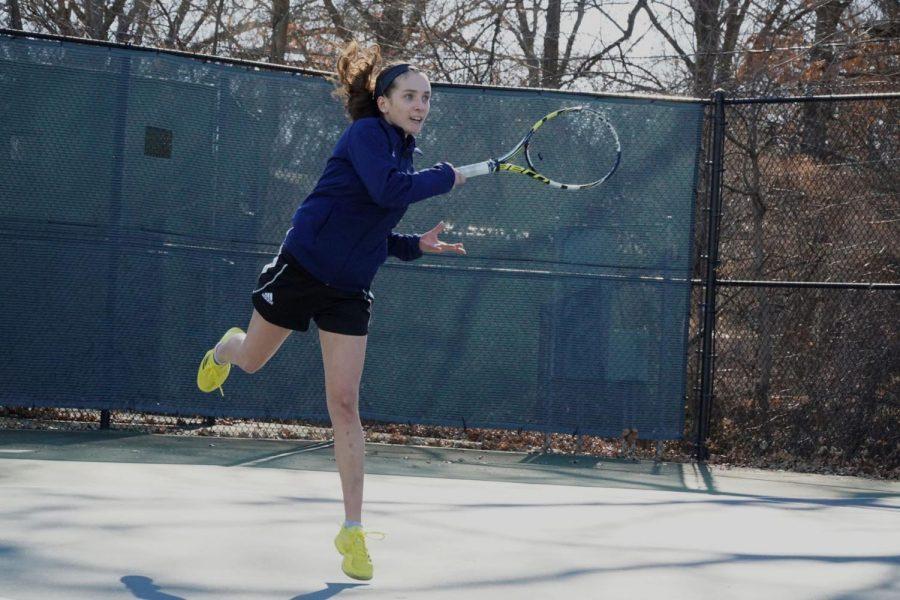 The Washburn tennis teams kicked butt and took names on their home court against Ottawa University as they won every match on both the men’s and women’s sides on Feb. 17.

In the singles rounds, the Ichabods performed equally as well. Valarezo fought against Lucas Michenka and pulled off a 6-4, 6-2 win after falling down 2-4 in the first set.

“He came back and won in straight sets,” Hunter said. “That was good mentally for him because it was a tough situation to be in, with everyone watching.”

Hunter played a solid singles match, taking a win in the No. 2 spot at 6-3, 6-0. Haase defeated Ottawa’s No. 3 player 6-0, 6-2. Eidenmueller, Brill and Dicu also defeated their competitors in straight sets.

The men now hold a team record of 3-1 and are looking forward to the rest of the season.

“We’re on the right track,” Hunter said. “We lost our first match of the season, but I think it was a good stepping stone to pick it up later.”

The women also finished 9-0 over Ottawa with sophomore Logan Morrissey and junior, Alexis Czapinski winning the No. 1 doubles spot 8-1. Juniors, MaKenna Gonzales and Ally Burr also went 8-1 in the No. 3 slot while freshman Alysha Nowacki and sophomore, Jacqueline Engelbrecht finished 8-5.

During the singles competition the ladies took the Braves by storm with Engelbrecht winning the No. 3 spot 6-0, 6-0. Nowacki took down Ottawa’s No. 4 player 6-1, 6-0 and sophomore, Madison Lysaught defeated their No. 5 slot 6-0, 6-1. Czapinski, Morrissey and Burr swept the Braves in straight sets as well.

The women’s team move to 2-2 in their spring season.

“Everyone went out with a lot of good energy and played really well,” junior MaKenna Gonzales said. “We’re off to a good start. I think once we get into March and start playing conference matches we’ll get a whole lot better.”

The Ichabods have no plans to slow down as they progress through the season.

“I’m looking forward to seeing how well we end up doing. Even in each match, it’s always so fun,” Gonzales said.