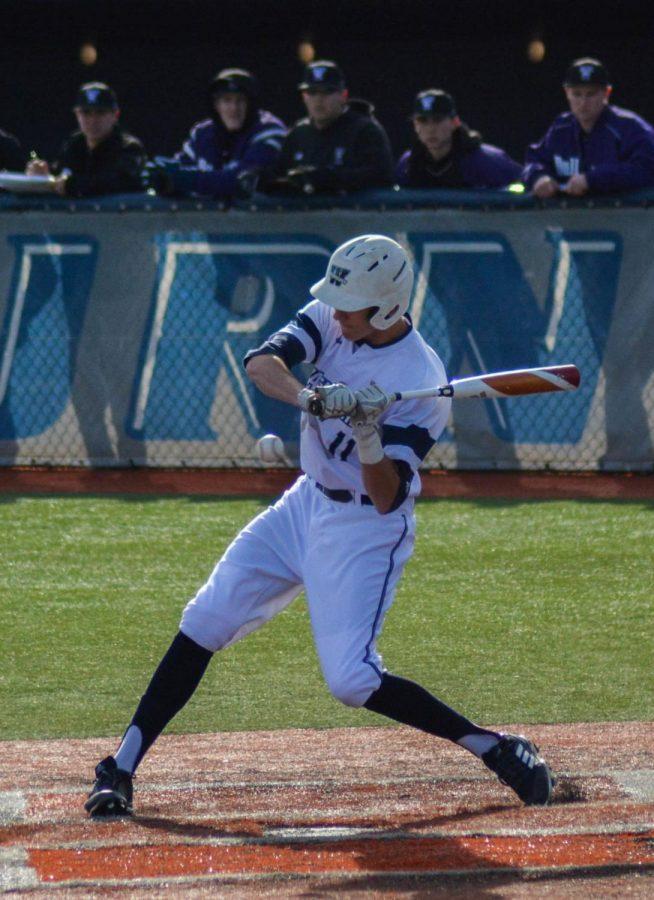 Up to bat: Junior, Javis Larson hits an inside pitch to the field at Falley Field against an MIAA opponent.

Washburn had a tough time against the University of Central Oklahoma Feb. 24, Feb. 25 and Feb. 26 as the Bronchos swept the entire series in Edmond, Oklahoma. With five losses already on record, the Ichabods are not looking well after the start of the season.

The first game was Feb. 24 at 2 p.m. While the entire series was not close in general, this game was a hard fought battle till the end. Junior, Brady Hoover accounted for the first run of the game for the Ichabods, tying the score at 1-1.

The game stayed close from there as the Ichabods tried to keep themselves in the contest. Hoover ended up with five at bats, one run, one hit and one RBI. Senior, Jake Bulbitz accounted for four at bats and one hit, along with senior, Bowe Behymer who had three at bats and two hits.

Washburn ended up going to extra innings with the Bronchos as they were tied at two when the ninth-inning expired. With UCO getting their first try to break the tie in the top of the tenth-inning, the Bronchos put one run on the board.

The Ichabods had a chance to answer back, however, they ended up falling short against UCO. Washburn lost this game 2-3 in extra innings as they hoped to bounce back with the next two games in the series in Edmond.

Unfortunately, that would not be the case. Washburn’s next two games against UCO were two matches of major disappointment. The Ichabods started the second game of the series Feb. 25 at 1:00 p.m.

UCO started off the game with the first run on the board in the first-inning. Washburn answered back with a run of their own in the second-inning from an RBI double from Bulbitz. Beyond that, the game fell apart from there.

The Bronchos scored five runs in the fourth-inning against the Ichabods one run in their half of the inning.

Washburn ended up with another loss with a score of 2-11. The Ichabods then faced the Bronchos in their final game of the series Feb. 26 at 1:00 p.m.

This game turned out worse than the second game in the series. The Bronchos started off this game with a hot start, scoring four runs in the top of the first-inning. Washburn eventually answered back with a run in the bottom of the third-inning from an RBI from junior, Javis Larson.

The situation had deteriorated by that point as the Bronchos went on to score six in the fourth-inning, one in the sixth-inning, three in the seventh-inning and two in the eighth-inning as the run rule was used in the ninth-inning.

The Ichabods only put up runs in the fifth-inning, sixth-inning and eighth-inning with three, one and one, respectively. These runs came from three RBIs by senior, Josh Crosby, and one RBI from senior, Darian Abram.

Washburn ended up losing the final game by a score of 6-16 putting their current overall record at 5-8 and a conference record of 0-3.

Up next for the Ichabods will be a series against the University of Central Missouri at Falley Field March 2, March 3 and March 4 at 3 p.m., 1 p.m. and 1 p.m., respectively. The Ichabods look to get back after their winless trip to Edmond.